Just Boris: The Irresistible Rise of a Political Celebrity by Sonia Purnell – review 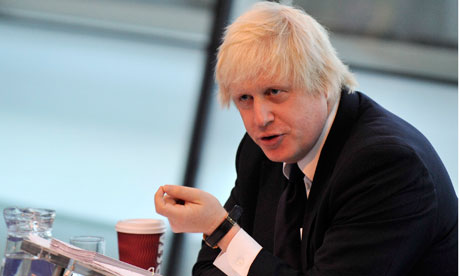 Just Boris: The Irresistible Rise of a Political Celebrity
by Sonia Purnell

In fact the mayor is in charge of tinkering. Central government has kept most real power for itself. The mayor concerns himself with transport – those weekends when the tube virtually closes down as one man with a spanner tightens the odd nut. And holes in the road. Four thousand in Blackburn, Lancashire? London has far more. And Boris bikes, which have been a huge success, especially for people who use them for 30 minutes at a time and so don't pay anything.

But most of all the mayor is a figurehead, an ambassador for the city. This Boris does with huge skill and aplomb. I watched him give a joint press conference with Mayor Bloomberg of New York, who runs a city far larger and richer than London. It was on the tedious topic of CCTV on subways. Bloomberg came across as a dessicated executive. Boris came across as Boris. He outcelebbed him in every way.

Now with the Tory conference about to start many Conservatives are asking when and if Boris will become their leader. There is no doubt that Boris and Cameron are lethal rivals, something which Boris repeatedly demonstrates. Sonia Purnell suggests this tactic is based on Johnson family lore. His great-grandfather, Ali Kemal, made an enemy of Kemal Atatürk, the father of modern Turkey. Ali was kidnapped, "denounced as a traitor, attacked with sticks, stones and knives, before being hanged, and, allegedly, his body parts stuffed into a tree." This story is told to and by all Johnsons, who regard it a lesson in the dangers of direct confrontation.

Instead, Boris loses almost no opportunity to assail Cameron, though usually by way of flip, almost unnoticed remarks – "drive-by politics" it's been called. Cameron attacks the bankers and Boris defends them. Cameron wants to reduce police numbers; Boris calls for more. "Broken Britain"? "Piffle," says Boris, one of the PG Wodehouse slang words he deploys.

At a Spectator dinner, Boris reflected on MPs' crooked expenses, and singled out for special mention "wisteria clearing", the only dodgy claim Cameron made. In return, the Tory leadership showed scant interest in Boris's mayoral campaign in 2008, though Cameron may, deep down, have preferred the Turkish method of dealing with an opponent. In any case, the old school ties are pretty loose.

Purnell depicts a deeply ambitious man, with an ability to turn almost everything in his life – friends, colleagues, speeches, articles, even liaisons – to his advantage. Take his affair with Petronella Wyatt. Michael Howard sacked him ostensibly not because of the affair, but because Boris lied to him. Howard went on to lose the 2005 election, and Boris became, for two years, the most powerful Tory in the land.

Even his disasters help him. In 2004, when he was editor of the Spectator, Boris published a displeasing editorial, written by Simon Heffer, about the culture of mawkish grief in Liverpool, tied to the murder of the terrorist hostage Ken Bigley. Howard had a fondness for the city and sent Boris north to apologise. He was ambushed by Bigley's brother on live radio. It was an excruciating moment, yet Boris's guts in going, and his acceptance of responsibility (he never named Heffer), plus a general disdain for Liverpool felt in much of the country all helped his image. With such good fortune, how can he fail?

And he is skilful at pretence. Purnell implies that he was a less than enthusiastic member of the Bullingdon club at Oxford, being no room-trasher and loth to cough up a cheque for the damage others had done. Certainly he is far brighter than he lets on – he almost got a first in classics, and they don't give those away with cereal packet tops. His carelessness with the truth seems to offend few people – while Brussels correspondent for the Telegraph he published a hugely exaggerated account of Jacques Delors's plans for centralisation, and this probably caused the Danish rejection in 1992 of the Maastricht treaty, which in turn seriously slowed European integration. Did Boris care? Of course not.

Is he the clown he presents in public? If so, he may well have caught a public mood around the world, an affection for what we might call the steel buffoon. Look at Berlusconi, whose sex life makes Boris look like a fumbling teenager. Sarkozy is a fairly ludicrous figure, as were Bill Clinton and George W. These people succeed. The public certainly doesn't mind affairs, and it seems to enjoy a certain silliness. Perhaps it reminds them of themselves.

Purnell takes the view that the closer you get to Boris the less you like him. Certainly she has serious doubts. In her minatory, even finger-wagging conclusion, she says – in effect – that he should grow up. "He inspires sympathy and loyalty but rarely repays it … he disappoints more often than he offends … his chief achievement so far has merely been the accumulation of enormous fame."

Perhaps so, but until now everyone who has underestimated Boris's brains, resource and tactical nous has been proved wrong. If he loses the mayor's job next year, it will simply be another stepping stone, an opportunity to use the time to seek the next glittering prize.

Simon Hoggart's Send Up the Clowns is published by Guardian Books.

I'm embarrassed that he is Mayor of our capital city. How on earth have Londoners found themselves in a position where they have to choose between Johnson or the odious Livingston? Two things that I can say in both of their favour: 1. They are both mildly amusing. 2. They more often than not say what they think - which is refreshing when compared to the majority of elected robots that exist now. This is a much needed trait for Mayor.

Can't ever see Boris being elected as Prime Minister. It's bizarre enough that Londoners believed he was an appropriate candidate. There is certainly an outside chance that he'll be leader of the Tories though.... IMO!

I think Boris is much more devious than you suggest: he's honed the Bertie Wooster-silly ass routine down to a fine art as a diversionary tactic when faced with awkward questions about serious matters of policy.

What gives you the impression I do not think him devious? It's not the case.

TickleCockBridge wrote:What gives you the impression I do not think him devious? It's not the case.

Then why do you say, "They more often than not say what they think"? That's largely true of Livingstone, perhaps, but not of Boris who performs his 'silly ass' routine precisely to divert attention from what he really thinks (i.e. Tory social Darwinism, red in tooth and claw).

TickleCockBridge wrote:What gives you the impression I do not think him devious? It's not the case.

Then why do you say, "They more often than not say what they think"? That's largely true of Livingstone, perhaps, but not of Boris who performs his 'silly ass' routine precisely to divert attention from what he really thinks (i.e. Tory social Darwinism, red in tooth and claw).

Ah, I see, fair point. No, by that I meant more along the lines that they do not follow their party lines. And their is no way in hell I think Ken is any less devious. The man is a compulsive liar and manipulator. They are as bad as each other.

TickleCockBridge wrote:they do not follow their party lines. And their is no way in hell I think Ken is any less devious. The man is a compulsive liar and manipulator. They are as bad as each other.

Both are ambitious politicians, self-promoting mavericks operating outside their respective party machines.

But Livingstone is, at least, a Londoner. Johnson is not.

It's a great shame that Labour picked Ken over the far better and likeable Oona King.