You Really Got Me: The Story of the Kinks by Nick Hasted – review

A biography of the ever-fractious Kinks 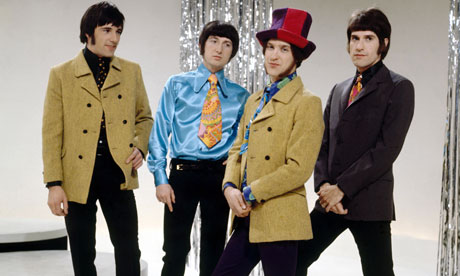 In the course of this book, Kinks frontman Ray Davies comes in for quite a battering. His brother and guitarist Dave Davies says he has "vampire qualities … it's like having a big sucker on you". His ex Chrissie Hynde simply calls him "a nut". Larry Page, who managed the Kinks in two different decades, concludes that "Ray was as big an arsehole in the 80s as he was in the 60s", while a former bandmate says that he's so tight he "squeaks when he walks".

You Really Got Me: The Story of The Kinks
by Nick Hasted

It's hardly a shock to learn that artists can be difficult, but over 40 years the Kinks have left a trail of wrecked hotel rooms, irate ex-wives and lovers and former bandmates driven to – and indeed over – the brink of a nervous breakdown. To pick one example from this biography of the band, on a US tour in 1987, the fractious Davies brothers set aside their usual differences in order to beat up the sound engineer. While peers such as Mick Jagger and Paul McCartney live like kings on the proceeds of long, mega-selling careers, the Kinks always managed to commit harakiri at the most commercially inopportune moment, despite having in Ray Davies a songwriter as good as any pop music has produced, as one listen to "Waterloo Sunset" will prove.

Thoughout their career, the band's motto seems to have been "if it ain't broke, break it". As Hasted's book makes clear, their most dramatic disasters have been self-inflicted. A 1965 Cardiff gig almost ended in decapitation when drummer Mick Avory threw a cymbal at Dave Davies's head after being informed by the guitarist that "your drumming's shit – they'd sound better if you played them with your cock". Three years later, Ray's refusal to hand over the sublime album Village Green Preservation Society to the record company on time ensured that it tanked.

The Kinks only seemed to feel at home on a sinking ship. After "Lola" returned them to the charts in the early 70s after a series of flops, and it was followed by another hit, "Apeman", the Davies brothers were positively displeased to find themselves back on Top of the Pops. "It did have that smell of: 'Oh blimey, not that again,'" Dave Davies tells Hasted. Happily, several catastrophes were around the corner, entertainingly detailed here – though the Kinks did become huge in America in the 70s and 80s, something often overlooked by British fans, who always associate them with their 60s run of era-defining singles, from "You Really Got Me" to "Days".

There have been several Kinks biographies over the years, including Ray's fictionalised "unauthorised autobiography" X-Ray and Dave's memoir Kink. Hasted's book is a worthy addition to the list. He diligently charts the band's vertiginous ups and downs, always returning, like Ray, to Muswell Hill, the vantage point from which the head Kink surveys London in those landmark songs, but also the place he can't escape. Like any great artist, Ray Davies expresses himself best through his work, and Hasted is good at pointing out the shadowy depths in songs such as "Autumn Almanac", a description of cosy domesticity that turns into a cry for help; and "Days", which he interprets as Ray's farewell to the 60s. (That said, elegiac moods were hardly new to the songwriter – aged 21, when swinging London was at its height, he wrote "Where have All the Good Times Gone?".) His crowning achievement, "Waterloo Sunset", gets its own perceptive chapter.

Hasted has interviewed the Davies brothers (not currently on speaking terms) and Avory. Bassist Pete Quaife, who left in 1969, died in June last year. Hynde is presumably the only one of Ray's exes who would talk, though she unsurprisingly declines to discuss the worst of what Hasted suggests was a volatile and violent relationship.

This book is littered with rock's usual litany of groupies, strippers and long-suffering wives bringing up children while the band members raise hell on the road. Occasionally, a male partner makes an appearance: in the mid-60s the omni-shagging Dave, known to his bandmates as Dave the Rave, had a brief relationship with Ready, Steady, Go! presenter Michael Aldred. Ray would explore homosexuality in the lyrics of the 1965 single "See My Friends" – also groundbreaking because of its use of Indian instruments. Dave Davies says that his gay experiences made him more sensitive, though the string of subsequent punch-ups suggests otherwise. His story includes an acid-induced meltdown, attempted suicide and recovery after mystical experiences even Shirley Maclaine might regard as outré.

The band's non-stop tragicomedy is so rich in incident that I suspect Hasted's difficulty was in knowing what to leave out. I would have preferred more on the glory days and less on the wilderness years and American resurrection, especially since Davies's later songwriting rarely reaches the heights of its youthful peak – though Hasted is illuminating on, and generous about, 70s and 80s albums such as Schoolboys in Disgrace.

There are two glorious moments in the 80s when Ray takes delight in turning down a Rolling Stones tour support slot and refuses to take Linda McCartney's calls, but otherwise Hasted doesn't make much of the wider context – what the Kinks did for pop, and how their peers reacted to them. The Davies brothers also ultimately elude our understanding – but even a psychoanalyst would struggle to explain some of the behaviour in this book. When Ray Davies wrote "I'm Not Like Everybody Else" he wasn't joking.

Very few bands have a better 'Greatest Hits' than the Kinks. Waterloo Sunset is stunningly good.

I've read this highly entertaining and unusual rock autobiography, and I must say that if RD is a 'vampire', a 'nut', an 'arsehole' and 'tight' he managed to disguise these unpleasant truths very well. If anything, he comes over- or, rather, puts himself over- as a hypersensitive soul, too unworldy for the nasty music biz.

So good that I believe Greil Marcus has written a book- or, at least, an essay- about it, which is always a sure sign of respectability.

(Poor Kirsty MacColl did a nice cover version of this.)

https://www.youtube.com/watch?v=Xnqf_UXmHmo&feature=related
Death of a Clown

https://www.youtube.com/watch?v=-2GmzyeeXnQ&feature=related
You Really Got Me