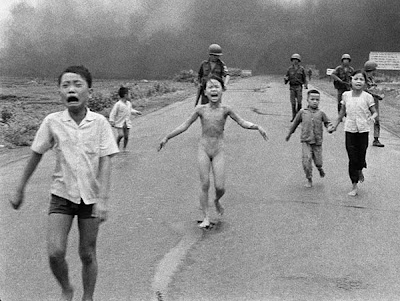 ...collateral damage. I can't watch this all the way through yet.
...the site for the above image and this video has an excellent follow up to this event.
http://tywkiwdbi.blogspot.com/2009/03/followup-on-famous-vietnam-napalm.html

...the napalm was dropped by the Sth Vietnamese, America's (and Australia's) ally. I thought most reports now say it was a deliberate raid to eradicate the North Vietnamese who were believed to have taken control of the village. The girl running down the road comments about the incident below:

http://tywkiwdbi.blogspot.com/2009/03/followup-on-famous-vietnam-napalm.html
The incident occurred when South Vietnamese planes dropped napalm on a South Vietnamese village occupied by North Vietnamese troops, resulting in "collateral damage" to many children, who came running down the road. The little girl was/is Kim Phuc, now a Canadian citizen and shown in the two photos above. The photographer was Nick Ut, who earned a Pulitzer Prize for the top photo.

Here's some further discussion from FamousPictures.org:
But did America have any involvement in the air strike? In 1996 Kim gave speech at the United States Vietnam Veterans Memorial in Washington, D.C. on Veterans Day where she said that we cannot change the past but can work for a peaceful future. After the speech, Vietnam war veteran John Plummer, now a Methodist minister, talked to some of his old buddies and got them to ask if she would like to meet him for he stated that he was the one who ordered the bombing. She accepted and they met briefly and Plummer remembers that, "as I approached her, she saw my grief, my pain, my sorrow. She held out her arms to me and we embraced. All I could say was "I'm sorry, I'm sorry, I'm so sorry' over and over again. And I heard her saying to me "It's all right. It's all right. I forgive. I forgive." He also claims that later in the day, they knelt together (Kim had converted to Chrisitanity in Vietnam) and prayed together. Plummer said, "Finally, I was free. I had found peace."

pinhedz wrote:The question (it was a poll before) was--do we blame Fieser? If not, whom?

...as I grow older my certainties develop blurred edges. We live our lives forwards, but only understand them backwards. I blame the human condition and our propensity to be dulled and manipulated by terms like 'insurgent', 'collateral damage', 'enhanced interrogation techniques'.

I don't know anything about physics and can't calculate how accurately Feiser foresaw how napalm would be used...but he alone can't carry the blame for the damage inflicted by napalm...there must have been a whole chain of people responsible every time it was employed.