It's a recurrent theme in cinema: obsession. Unless they eat human meat there's something very attractive about obsessive characters. They're determined to do what they have to do or they just inevitably end up doing what they didn't plan to do. There's an obsessive mind and a subject of obsession... which is charming. Sometimes those who lose ground to move have to recover it somehow. Sometimes an specific need appears.

"The skin I live in" that I saw recently fits this thread... but I won't say more in order to not spoil your enjoyment of the movie.

Claude Chabrol's films centers on obsession. Don't they?
This is a movie I enjoyed a lot: The Bridesmaid

Spike Jonzes' 'Adaptation' deals with obsession in an interesting way. Worth a watch.

Not to despise your word but I've just seen the trailer and I think I wouldn't like it. The fact that Nicolas Cage is in the movie plays a part in it.

asdf wrote:They're determined to do what they have to do

I think Donald Sutherland fits this category in Fellini's 'Casanova':

"He's inexorably drawn by his inclinations and reputation into a succession of chilly, unfulfilling sexual encounters, culminating in making love to a mechanical doll" 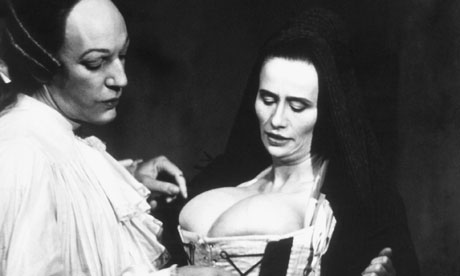 ^ I don't know if it deals with obsession but there's a japanese movie some people talked me about: Air Doll.

"Middle-aged Hideo lives alone with an inflatable doll he calls Nozomi. The doll is his closest companion. He dresses it up, talks to it over dinner, takes it out for walks in the community (with the doll in a wheel chair) and has sexual intercourse with it. However, unbeknown to Hideo, Nozomi finds a heart."

Glenn Close's performance in Fatal Attraction was worthy of a new adjective:

"Bunny boiler is a pejorative term for an obsessive and dangerous person, referring to a former lover who stalks the person who spurned them. The term is normally used for a woman who stalks a male former lover.

The term derives from a scene in the 1987 film Fatal Attraction where a scorned woman (played by Glenn Close), seeking revenge on her ex-lover, kills his daughter's beloved pet rabbit and places the deceased animal in a pot of boiling water while the family's away when from home. The scene concludes with the family returning to the house...while the daughter's in the garden searching for her rabbit, the mother's lifting the lid off the bubbling pot to reveal her deceased pet (parts of the scene were cut from syndicated broadcasts.)"

I once used the term 'bunny-boiler' and had to explain what I meant.

asdf wrote:Not to despise your word but I've just seen the trailer and I think I wouldn't like it. The fact that Nicolas Cage is in the movie plays a part in it.

Cage is a turn-off for any sane person, although it should also be noted that he is actually in a number of very good films.

The film is excellent, written by Charlie Kauffman, the writer of "Sunshine of a Spotless Mind" and "Being John Malkovich".

Ossessione
Often considered one of the first examples of Italian neorealism, Luchino Visconti's first film was this adaptation of James M. Cain's steamy novel The Postman Always Rings Twice, which would also be made twice in the U.S., first in 1946 with Lana Turner and John Garfield and then in 1981 with Jack Nicholson and Jessica Lange. Massimo Girotti stars as a drifter named Gino, who gets a job at a provincial inn. The handsome wanderer attempts to resist the advances of Giovanna (Clara Calamai), the estranged wife of nasty innkeeper Bragana (Juan de Landa), but he eventually gives in. Gino then allows her to talk him into killing Bragana to get the insurance money, with predictable results. Although the melodramatic story is a far cry from the post-war social statements of such later neorealist classics as Roberto Rossellini's Rome, Open City (1945) and Vittorio De Sica's Bicycle Thieves (1948), the movie began to feature some of neorealism's defining characteristics: above all, an emphasis on outdoor shooting and natural light and a relentless focus on the lives of the poor. Ossessione caused a sensation not just because of its lurid subject matter but also because Visconti's realist style makes you practically feel the heat and dirt and sweat of the film's environment. ~ Robert Firsching, Rovi

I saw it years ago and would like to see it again.

I guess Almodóvar's movie Talk to Her fits here too.

The main character, a nurse, is obsessed with the girl in a coma he takes care of.