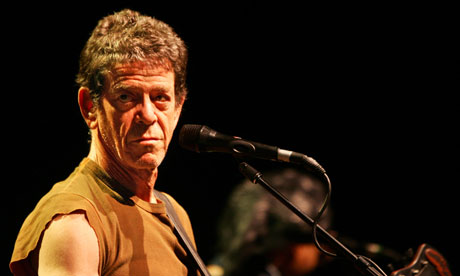 Was there ever a more deliriously miserable album than Berlin, Lou Reed's anguished 10-song tragedy about two star-crossed junkies and what became of them? Recorded in 1973, when the singer was on the cusp of mainstream stardom following Walk on the Wild Side, it was the record that almost broke him. Berlin was a financial flop and a critical calamity; dismissed as "a disaster" by Rolling Stone magazine. Three decades on, the same publication was hailing it as one of the greatest albums ever made.

Berlin, in short, is a beautiful downer. It burns and it bites and it should be approached with caution. For years it seemed that even its creator had no wish to revisit the thing; snubbing it in his live performances and bristling whenever interviewers attempted to draw him on the subject. But in December 2006, Reed (succumbing to a rare bout of nostalgia) agreed to recreate the album in full, over five nights, at a concert hall in Brooklyn. Visitors to St Ann's Warehouse are duly welcomed by the film-maker Julian Schnabel, who invites them to "turn off your cell-phones and have a good time." From here, it's a clear run through to the suicide.

Schnabel's camera frames Reed on stage: a foursquare figure against the watery back-projection, bookended by 12 choristers and a 30-strong band. He sings of Jim and Caroline, two footloose drug addicts who fall in love and fall on their fronts. Jim comes to hate Caroline; he thinks she's a "slut". Eventually, their offspring taken into care, Caroline reaches for the razor blade and opens her wrist. Poor Jim is left to pine for her, and eulogise her in verse although, even here, his resentment still bubbles ("Somebody else would have broken both her arms," he concedes on the album's wistful closing track).

By contrast, on the evidence of Schnabel's film, Reed looks to have made his peace with this unhappy duo. If Berlin was an album about loss, ruin and ghosts, then there's something fitting about the sight of the musician on stage, with grey in his hair and specs on his nose, turning back to re-open the old sores. The songs stand up; still pack a wallop. And yet Reed's gentle, world-weary delivery finds new angles into this material, making it bleed afresh to clean the wound.

Job complete, there is just time for some other classics from the Reed back catalogue before he takes his leave. This, I'm guessing is his concession to the audience; their reward for sticking with him on his return trip through hell. And when the electrifying Sweet Jane kicks in – spinning dreams of freedom and fireplaces, wine and roses – it's like the sun breaking through, the landscape opening out; like Larkin's arrow shower sent out of sight, somewhere becoming rain.

perfect day... I always thought it was autumn

Thanks for all you gave me and countless others.

Thought of you Andy, as you are the Lou Reed freak I know. Listening to Legendary Hearts album here

He often said that he wanted his recordings to have an impact on listeners similar to that of a person sitting with you in the room, talking to you. There are very few artists who have had an impact on my personlality to the same degree as he has - only Jacques Brel, in fact.
So in away, losing Lou isn't really about the death of "rock-icon" or whatever the papers are calling it to me.
It's the loss of someone whom I felt to be quite close to me, in fact.

People die. A lot of them aren't as lucky as Lou has been. But dammit, I'm going to miss this man a lot.

Absolutely true: Lou was neither the marginalized artist some portray him to have been, nor the deeply revered leading example all those paying him their tributes are making him look like.

There's an article in Dutch by Belgian journalist Serge Simonart that probably has it right.
Everybody despises Serge because he thinks way too much of himself - to be frank: in Belgium modesty is valued to the point where self-confidence and an outspoken opinion are enough to make you come off as blatantly arrogant.
So his infamous quote 'I call Bowie David' is sometimes changed into 'David can call me Serge'.

Anyway: he obviously is speaking about himself rather than Lou, starting with how he sneaked in backstage back in the mid-70's as a very young teenager up through all the encounters he had with a cold and cantankerous man.
None of that is new or interesting.
But his conclusion, I think, is probably spot on: Lou had grown into a member of the Rock 'n' roll bourgeois and his underground though image was just that, an image. He says something to the effect that you were more likely to meet Lou in the luxurious restaurant of the 'Hotel Georges V' in Paris than on any true 'wild side' in New York City.

Nonetheless, I do believe that Lou - for better or for worse - is an interesting and beautiful example of a person shunning all too much compromise. Brel once said ''Mieux vaut se tomper que de se taire." - "It's better to be mistaken than to remain silent" Lou seems to have lived up to that maxim in an absolutely cool way.

Last night - my local time - I didn't lose an icon or a legend or anything like that. I lost someone whom I felt was somehow intimate to me. For lack of a better term: a friend.

This one goes straight to my heart

How lovely, duets of people killing each other

My friend Eccles telled me I should change my name to gluebottle. I don't know what he meaned. I think he was making a joke.

While this is nothing like me, I can't help but admit his passing away 'somehow gets me down'.

This is for you Andy.
I posted Lou's 'translation' of Edgar Allen Poe's 'The Raven' in the poetry section for you as well. I think it's awesome. Lou Reed was the first live musician I ever saw, way back...