...if they don't agree with the ultraliberals politically.

Look at the way the ultraliberals ridicule and loathe Michael Steele because he's a Republican and doesn't tow the I'm a victim line ! 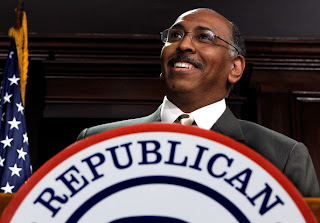 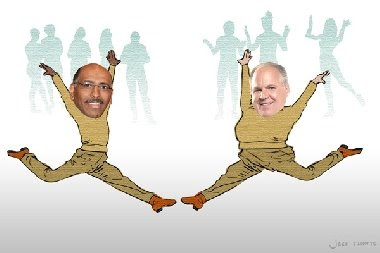 If these were pictures of President Obama, the same ultraliberals who made these would be calling the photo's racist.

I started a bunch of threads one night just to try and generate some traffic here. (they show up when people do searchs) Yeah, I was feeling a little mental but all the same this thread is the truth. The people behind this controversy are same people who cried foul, when Obama was being raked over the coals for hanging out with Rev Wright for 20 years and claiming he never heard any of Rev Wrights hate speech.

The unrelenting network coverage of the Herman Cain sexual harassment story continued on Thursday and Friday with an additional 13 stories. That brings the total number of reports to a staggering 63 stories in just four and a half days.

Good Morning America offered up three stories on Friday, including a Brian Ross report tinged with anonymous allegations and rumor-mongering. Ross speculated, "Former employees tell ABC News, Cain was a regular on Washington's after-work bar scene, often with young women who worked with him at the restaurant association." Ross hinted, "Some say it was just Cain being personable and gregarious."

The ABC reporter also talked to Ricki Seidman, who he simply identified as a "political operative." Ross left out the fact that Seidman has worked for Bill Clinton, Michael Dukakis and other Democrats. Of Cain's accusers, who are anonymous, the political operative sympathized, "They've been called by all kinds of names already by people who have no idea who they are." (Ross did explain that Seidman worked with Anita Hill when she testified against Clarence Thomas.)

On NBC's Today, guest news anchor Tamron Hall compared the scandal to the 1991 Thomas hearings, misrepresenting what the now-Supreme Court judge was accused of. She suggested Cain has compared "himself to Supreme Court Justice Clarence Thomas, whose confirmation was held up by a sexual assault allegation."

Early Show correspondent Jan Crawford explained, "And this morning, a pro-Cain political action committee is running a new Web ad attacking the left and the media, saying the controversy is motivated by race." Early Show offered three reports. On Thurday's evening newscasts, all three programs offered one full report each. World News' Jon Karl observed, "Despite the confusing and conflicting accounts offered by Cain this week, his campaign has been raking in cash, claiming to raise $1.2 million since the story broke last Sunday.

"I make my living off the Evening News
Just give me something-something I can use
People love it when you lose,
They love dirty laundry

Well, I coulda been an actor, but I wound up here
I just have to look good, I don't have to be clear
Come and whisper in my ear
Give us dirty laundry

Can we film the operation? Is the head dead yet?
You know, the boys in the newsroom got a running bet
Get the widow on the set!
We need dirty laundry

We can do "The Innuendo"
We can dance and sing
When it's said and done we haven't told you a thing
We all know that Crap is King
Give us dirty laundry!

Don't expect any ATU regulars to read this BUT maybe someone surfing the web might give this rewrite a glance.

These ultraliberals are off the hook !

National Public Radio proved a long time ago it disdains black conservatives. Remember when NPR’s Nina Totenberg launched the unproven sex-harassment charges against Clarence Thomas? NPR doesn’t even like black liberals who appear on Fox News: they canned Juan Williams. The sex-harassment charges against Herman Cain aren’t ruining him quickly as the media hoped, so on November 11, NPR viciously attacked Cain for being an enemy of blacks, and a “minstrel” to white conservatives.

Reporter Karen Grigsby Bates began with Harvard professor Randall Kennedy. “Black people know that if Herman Cain had his way, their lives would be diminished,” he announced. “And they intuit that Herman Cain's policies are against their interests.” Who is this man to judge like that? NPR made no attempt to identify Professor Kennedy as having served on the editorial board of the hard-left Nation magazine. They didn’t even call him “liberal.” He is partisan enough to have insisted in April that liberal Supreme Court justices Ruth Bader Ginsburg and Stephen Breyer should retire now because they couldn’t survive a two-term Republican president.

Kennedy somehow gets to speak on behalf of all black Americans everywhere, and that if Herman Cain “had his way,” he wants blacks to be diminished. This is really rich drivel coming from the Left. They are the ones who placed blacks in dangerous public-housing high-rises in high-crime neighborhoods in the “War on Poverty.” They are responsible for subjecting black children to atrocious public schools with no chance of escaping to a private school that cared about them. They entrenched a welfare state that chased away black fathers and placed Planned Parenthood clinics in urban neighborhoods for their abortion “needs.” But Randall Kennedy and NPR apparently think that’s the Nirvana of black interests; Cain is evil for opposing their agenda.

NPR then turned to Jack E. White, a former screed-writer for Time magazine. He also wasn’t labeled a liberal, despite working for Time and now for the black liberal website The Root, owned by The Washington Post. NPR’s Bates said White was outraged that Cain, like
Thomas, would call unproven sex-harassment charges a “high-tech lynching.” Bates said “He believes Cain and his white supporters have struck a bargain.” A racist bargain. “Basically, Herman Cain tells them what they want to hear about blacks, and in turn, they embrace him and say, ‘See, that proves we aren't racist,’” said White. Then he stuck in the knife: “He's even willing to be a minstrel for them, referring to himself sometimes as ‘Cornbread,’ or quoting his father as speaking ungrammatically, as saying, you know, things like I does not care.”

Even Bob Beckel on Fox called the “minstrel” line “obscene.” In Jack White’s mind, we are forever stuck in 1963, and every white conservative is somehow a Southern Democrat racist Bull Connor. But today’s 18-year-old Americans who may turn out to vote for Herman Cain early next year were born in 1993. You can’t endlessly suggest that racism is taught in schools and on TV and over every Republican dinner table....unless you’re a crank. Or a guest on NPR.

The third black Cain critic was a professor named Vincent Hutchings, who said Cain was “crazy,” but “crazy like a fox.” There were no black conservative professors allowed – no Thomas Sowell, or Walter Williams. NPR doesn’t want blacks to consider it conceivable that a black could choose to be a conservative, and be considered respectable. The only conservative view allowed was a clip of Ann Coulter. (NPR somehow couldn’t acquire an original interview.) Coulter said on Fox that black conservatives have to swim against a very strong tide of black opinion, so “our blacks are so much better than their blacks.”

To which “objective” Bates replied: “Observations like that may be why their blacks are so few in number." Bates clearly believes (as her report demonstrates) that black conservatives are metaphorically owned by masters, and simply cannot fathom why blacks would want to be
released from the liberal plantation.

Herman Cain may win the Republican nomination, or he may not. But it’s quite clear from all the media coverage that the liberal media don’t want him even standing on the debate stage. It ruins their preferred caricature of the Republicans as an all-white country club that sees blacks as the people who hand them towels in the restroom. If they can’t push Cain off the stage, then they’ll try to smear him into a cartoon minstrel. As so often happens in liberal media circles, the goal of accuracy takes a back seat to victory.

Ask yourself: Would this vitriol against Cain exist if he were white !