Oil rises to near $100 as US debt talks drag on

Oil rises to near $100 as US debt talks drag on

Give them a day or two and the tools of the ultraliberal profit driven media will be blaming President Bush for this ! And then they'll say if it wasn't for President Obamas genius moves, prices would be even higher.

SINGAPORE - Oil prices rose to near $100 a barrel Tuesday in Asia, boosted by a weaker dollar as talks among U.S. leaders made little progress ahead of next week's deadline to raise the government debt limit. Benchmark oil for September delivery was up 42 cents to $99.62 a barrel at late afternoon Singapore time in electronic trading on the New York Mercantile Exchange. Crude lost 67 cents to settle at $99.20 on Monday. In London, Brent crude gained 14 cents to $118.08 per barrel on the ICE Futures exchange.

Republican and Democratic leaders rejected each others' government spending and debt proposals Monday as an Aug. 2 deadline looms for Congress to raise the government's $14.3 trillion debt limit. Without action by that date, the Treasury will be unable to pay all its bills, which could lead to a debt default and undermine the global economy. "It's going to be tough over these next few days as the government plays the default card," Blue Ocean Brokerage said in a report. "One simple announcement that things are resolved will snap the markets back."

Investor concern has grown this week about the potential economic damage that could be caused by not raising the debt limit. However, traders are still factoring in expectations that an agreement will be reached before the deadline passes. "The continued lack of progress in negotiations has been absorbed surprisingly well by the equities and oil markets," Ritterbusch and Associates said in a report. "We still feel that a breakout of the recent trading range will eventually develop to the upside, but such a development will likely demand some form of agreement regarding the debt ceiling."

A weaker U.S. dollar made commodities cheaper for investors with other currencies and helped boost crude. The euro rose to $1.4516 on Tuesday from $1.4378 late Monday. Investors will also be closely watching the latest U.S. consumer confidence data scheduled to be released later Tuesday. In other Nymex trading in September contracts, heating oil gained 1.2 cents to $3.13 a gallon while gasoline rose 1.5 cents at $3.10 a gallon. Natural gas futures for August delivery dropped 3.0 cents at $4.36 per 1,000 cubic feet.

It's funny all the heat President Bush took when the price of gas went up with a jolt.

The same people who made all the noise about it, are now defending President Obama as prices sky rocket ! 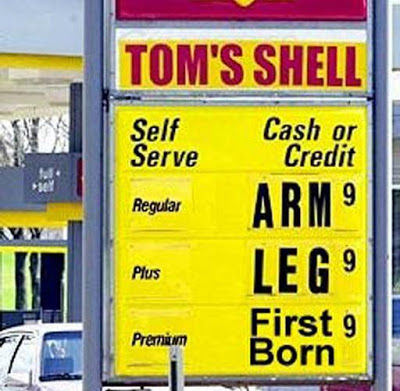