The navigational ability of beasts

The navigational ability of beasts

A B-type bus from London converted into a Pigeon loft for use in Northern France and Belgium during the Great war.

Soldier with message and carrier pigeon during WWI.

Research has been performed with the intention of discovering how pigeons, after being transported, can find their way back from distant places they have never visited before. Most researchers believe that homing ability is based on a "map and compass" model, with the compass feature allowing birds to orient and the map feature allowing birds to determine their location relative to a goal site (home loft). While the compass mechanism appears to rely on the sun, the map mechanism has been highly debated. Some researchers believe that the map mechanism relies on the ability of birds to detect the Earth's magnetic field. It is true that birds can detect a magnetic field, to help them find their way home. A light-mediated mechanism that involves the eyes and is lateralized has been examined somewhat, but recent developments have implicated the trigeminal nerve in magnetoception. Research by Floriano Papi (Italy, early 1970s) and more recent work, largely by Hans Wallraff, suggests that instead pigeons orient themselves using the spatial distribution of atmospheric odors,[12] known as olfactory navigation. Near their home lofts, in areas they have previously visited, pigeons probably are guided by visual landmarks.

Various experiments suggest that different breeds of homing pigeons rely on different cues to different extents. Charles Walcott at Cornell was able to demonstrate that while pigeons from one loft were confused by a magnetic anomaly in the Earth it had no effect on birds from another loft a mile away. Other experiments have shown that altering the perceived time of day with artificial lighting or using air conditioning to eliminate odors in the pigeons' home roost affected the pigeons' ability to return home.

Some research also indicates that homing pigeons navigate by following roads and other man-made features, making 90 degree turns and following habitual routes, much the same way that humans navigate

A flock of Barnacle geese during the Autumn migration.

Bird migration is the regular seasonal journey undertaken by many species of birds. Bird movements include those made in response to changes in food availability, habitat or weather. Sometimes, journeys are not termed "true migration" because they are irregular (nomadism, invasions, irruptions) or in only one direction (dispersal, movement of young away from natal area). Migration is marked by its annual seasonality. In contrast, birds that are non-migratory are said to be resident or sedentary. Approximately 1800 of the world's 10,000 bird species are long-distance migrants. 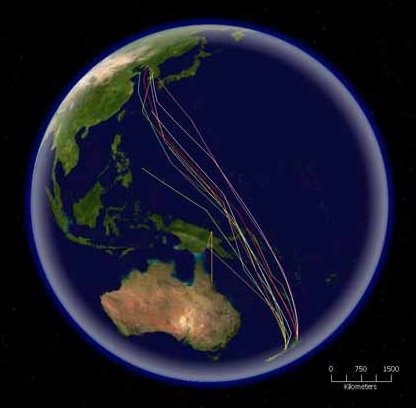 The routes of satellite tagged Bar-tailed Godwits migrating north from New Zealand. This species has the longest known non-stop migration of any species, up to 10,200 km (6,300 mi).

Navigation is based on a variety of senses. Many birds have been shown to use a sun compass. Using the sun for direction involves the need for making compensation based on the time. Navigation has also been shown to be based on a combination of other abilities including the ability to detect magnetic fields (magnetoception), use visual landmarks as well as olfactory cues.

Long distance migrants are believed to disperse as young birds and form attachments to potential breeding sites and to favourite wintering sites. Once the site attachment is made they show high site-fidelity, visiting the same wintering sites year after year.

The ability of birds to navigate during migrations cannot be fully explained by endogenous programming, even with the help of responses to environmental cues. The ability to successfully perform long-distance migrations can probably only be fully explained with an accounting for the cognitive ability of the birds to recognize habitats and form mental maps. Satellite tracking of day migrating raptors such as Ospreys and Honey Buzzards has shown that older individuals are better at making corrections for wind drift.

As the circannual patterns indicate, there is a strong genetic component to migration in terms of timing and route, but this may be modified by environmental influences. An interesting example where a change of migration route has occurred because of such a geographical barrier is the trend for some Blackcaps in central Europe to migrate west and winter in Britain rather than cross the Alps.

Migratory birds may use two electromagnetic tools to find their destinations: one that is entirely innate and another that relies on experience. A young bird on its first migration flies in the correct direction according to the Earth's magnetic field, but does not know how far the journey will be. It does this through a radical pair mechanism whereby chemical reactions in special photo pigments sensitive to long wavelengths are affected by the field. Note that although this only works during daylight hours, it does not use the position of the sun in any way. At this stage the bird is similar to a boy scout with a compass but no map, until it grows accustomed to the journey and can put its other facilities to use. With experience they learn various landmarks and this "mapping" is done by magnetites in the trigeminal system, which tell the bird how strong the field is. Because birds migrate between northern and southern regions, the magnetic field strengths at different latitudes let it interpret the radical pair mechanism more accurately and let it know when it has reached its destination. More recent research has found a neural connection between the eye and "Cluster N", the part of the forebrain that is active during migrational orientation, suggesting that birds may actually be able to see the magnetic field of the earth.

Life cycle chart (of anadromous fish that come through the Lake Washington Ship Canal Fish Ladder). From a pamphlet about the fish ladder, which is located across the channel from the Hiram Chittenden Locks, Seattle, Washington. Scanned at 600 dpi and slightly cleaned up.

The diagram covers both natural propagation and hatchery propagation. In the pamphlet, a remark to the lower right of the diagram says, "Length of the life cycle and of hatchery care vary with species and conditions."

After spending up to five years feasting in the bountiful water of the Pacific, the adult salmon return to the coast. The method by which they discern their own birthing-places is still something of a mystery, though their accuracy in re-locating these sites is impressive.

It is thought that they rely on their vision for much of the trip, though experiments with (temporarily!) chemically-blinded salmon have shown that they utilise their sense of smell to pinpoint the exact river system. Many salmon will die on this journey, and those that make it often arrive battered and bruised. They must travel against the flow of water for the entire journey, and this includes travelling up waterfalls – something which has been the subject of many a stirring picture.

My sister had a cat who unaccountably disappeared one day.

Months later, the same cat turned up at the new place.