I am a bit sad about the death of Seve Ballesteros - he always seemed like a genial, lovely and sweet guy.....(not to mention his golf skills)

it's affected me quite a bit, because it's rare to see a person who is so obviously talented with such humility and real beauty (not physical)

which was compounded for me today seeing a young mother diagnosed with a fatal brain tumour and her absolute sheer courage.....as she wept for the sake of leaving her little kids......not for her own sake (on a horribly graphic hospital reality program at work)

and really I'm getting a bit sick of hearing about people dying from brain problems......I really don't know how many more I can handle....

Rafael Nadal - is a sexy bloody wunderkind......so, yeah, I didn't realise the article was about him crying about Seve

but if you can think of any, go for it

(some bull-fighters might have had the kind of effect on people I'm talking about, but is that a sport?)

was he/or is he personable?

I've decided that humans are probably the safest bet for me to protect right now.......(with all my magical powers....lol)

I mean the ones that are murdered (after being abused)

and the forgotten ones that I still burn a candle for

animal deaths have often left an inconvenient cry for help on my conscience......

I can only accommodate so much in my sphere of compassion (although I really care about animals quite a bit....if not a lot....and from time to time worry about their suffering)

it is prioritising - a horrible word when it comes to suffering......

I think I'm on the right track

so far as he is a creep, I find nothing else to admire about him

He rose to prominence shortly after the Spanish Civil War and is considered by some to be the greatest bullfighter of all time. His style was sober and serious, with few concessions to the gallery, and he excelled at the 'suerte de matar'—the kill. Manolete's contribution to bullfighting included being able to stand very still while passing the bull close to his body and, rather than giving the passes separately, he was able to remain in one spot and link four or five consecutive passes together into compact series. He popularized a pass with the muleta called the "Manoletina," which is normally given just before entering to kill with the sword. In addition to all of the major bullrings of Spain, he had very important triumphs in Plaza Mexico. He died following a goring in the right upper leg as he killed the fifth bull of the day, the Miura bull Islero, an event that left Spain in a state of shock.

Manolete received his fatal goring in the town of Linares where he appeared alongside the up-and-coming matador Luis Miguel Dominguín, who, after Manolete's death, proclaimed himself to be number one. In response to Manolete's death, General Francisco Franco, then dictator of Spain, ordered three days of "national mourning", during which only funeral dirges were heard on the radio. 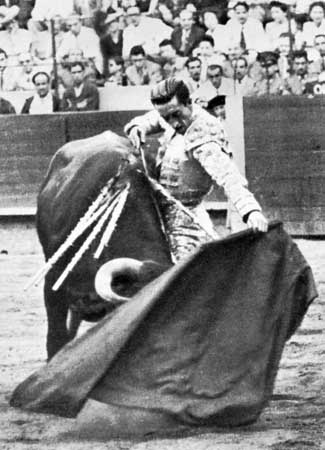 Manolete, in inaction, exhibiting the perfect stillness that was his hallmark.

Manolete being carried from the Linares bullring, following his fatal- as it turned out- goring.

Later this year, a film about his life, starring Adrian Brody and Penelope Cruz, is due for release.

bull-fighting is kind of anachronistic these days......

I'm pretty sure the distinction between being a carnivore and disdain for the 'art' of bull-fighting would make me a hypocrite if I really thought about it too much......

but like I said - I'm more concerned about what happens to people than animals.......

Catherine wrote:I'm pretty sure the distinction between being a carnivore and disdain for the 'art' of bull-fighting would make me a hypocrite if I really thought about it too much......

I don't see it that way.
Killing and torturing animals for "art" motives is quite different from killing them to obtain food. It could be done better though (ecological food?) but still it's not the same.
I'm not saying that people who are attracted to bullfighting are cruel, they just don't realise what it really is. What you said, it is anachronistic. I understand old people liking it, they've seen it all their life and they are used to it but the young ones have no excuse.

I see where you're coming from

but I really don't understand the distinction......between the idea of some kind of shock about the sport or art of killing animals and the ingrained complacency to brutal practices in farming

and for that reason it's almost a redundant concern for me

I care a lot more about people

it becomes such an exercise in stupid prioritising.......and I'm torn between all the problems and horror that people go through

so in effect - I'm overwhelmed by the crazy, awful panoply of human suffering and I can't do a thing

which leaves me in a bit of a muddle

and the really unforgivable early death of Natasha Richardson

and the ordinary people who have (with a great deal of courage) faced an early death.....

see, I'm just kinda stupid in a way......just some kind of weeping fukking idiot that thinks too much about things

well, that's very honest of you, when honesty has become such a recent de rigeur accessory (just kidding - I'm pretty sure my sudden prolific guilt and revelation gig has not had any kind of effect on anyone except maybe you)

it's such a quandary for me as how best to expend my limited 'compassion' resources.......right now it's a $5 monthly contribution to one of our guilt easing charities

but I guess, I'm kind of like the online Bob Geldof

speaking of which, why did you choose Edinburgh over Dublin.......?

in that case - if you've already lived in Dublin as far as I'm concerned you've done the most important bit........hehehe

I wish you well on your travels.......there aren't many spots in the world that I've travelled to that I disliked

and there have been many that I adored......

go wherever your heart and your GPS device leads......

(there are a lot of people who have no interest in other cultures.....)

which is such a rewarding instinct....when it is put into effect

I guess you need to be Spanish, to truly appreciate and accept bullfighting. It is losing popularity, as political correctness permeates even Spanish ways and customs. I don't condone it, have never attended the corrida, yet can appreciate its structured, barbaric nobility. Manolete and Islero killed each other that baking hot afternoon in Linares, some 63 years ago.

Yes, it is losing popularity here but sadly still there are a lot of people who support it.

Thank you, Catherine
But I'm not going yet.

I attended many bullfights when I was younger with not much of a developed conscience and much more of a lack of consciousness - I was a kid.......

the freshness of the food, the rustic prettiness of the peasants or even the gourd of wine that was so handy and intoxicating

it was some idea of truth - some kind of approximation of what the good life is.........and that has stayed with me

the dusty roads, the crazy passion and the beauty of a country bridging delicately the ignorant past and the modern world

I still like the Spain of my dreams.....and handily I have a Spanish son to remind me of the poetry of the language that resonates across centuries (the language I decided not to learn) but my bit of Spain travels with me everywhere


Thank you, Catherine
But I'm not going yet.

it's often better to leave when you're ready.....hehehe - without sounding too much like Doctor Octopus

I've left mostly when I wasn't prepared to leave

especially leaving London........I was ready, but I wasn't prepared

guacamayo wrote:I think I see the difference between being prepared and being ready. Being ready is necessary but being prepared... well, you will manage when you're in it. This time I need to be prepared also, more or less, because I'm coming from a shitty period of my life and if I leave without having recovered I'll fail. I don't want to risk so much and come back to the shit, althought the shit will always be there and nothing can assure me I won't be in it again hehehe I hate the shit.

I finally left in complete desperation and jumped on a plane with no money - so I wasn't prepared........

I'm never going back to that shit

sometimes I have nightmares (haven't had one recently) about living there and realising that I didn't get away......and the 'sinking feeling'

and then I wake up and it's not real

I have a friend in 'the shit' right now - who has the same nightmares - he did escape but ended back in it.....

he wakes up and for him the nightmares are real.......

either before you go or after you arrive somewhere else

Thank you, I hope so too

Now I am quite well.