Material replicated below in the event of link expiry:

Clogging is a type of folk dance with roots in traditional European dancing, early African-American dance,[1] and traditional Cherokee dance in which the dancer's footwear is used musically by striking the heel, the toe, or both in unison against a floor or each other to create audible percussive rhythms.
Clogging was social dance in the Appalachian Mountains as early as the 1700s.

As the clogging style has migrated over the years, many localities have made contributions by adding local steps and rhythms to the style. Welsh seamen appear to have adopted a dance very early on and may have been those who introduced it to the British Isles.[citation needed] As the dance migrated to England in the 1400s,[citation needed] the all wooden clog was replaced by a leather topped shoe with a one piece wooden bottom. By the 1500s a more conventional leather shoe with separate wooden pieces on the heel and toe called "flats" became popular, from where the terms "heel and toe" and "flat footing" derive.

In later periods it was not always called "clogging", being known variously as flat-footing, foot-stomping, buck dancing, clog dancing, jigging, or other local terms. What all these had in common was emphasizing the downbeat of the music by enthusiastic footwork. As for the shoes many old clogging shoes had no taps and some were made of leather and velvet, while the soles of the shoes were either wooden or hard leather.

]Wales
Clog dancing is traditional in Wales and is a regular feature of both local and national eisteddfodau. Competition can be energetic with the dancers leaping over brooms. "Welsh Clog Dancing is not like North-West or Lancashire Step. It is not a revival, as it is danced in the style of the unbroken tradition."

[edit]England
Cecil Sharp frequently encountered step dancing, clog dancing and North West morris dancing (a type of morris often performed in clogs and often mistakenly referred to as 'clog dancing') in his search for folk dances in England, but it was Maud Karpeles who was more effective in documenting some of these dances. She encountered groups of North West morris dancers in the North-West of England. Her book The Lancashire Morris Dance was published in 1930.

In 1911 John Graham had published Lancashire and Cheshire Morris Dances from the same area. Both in the USA and in England it was also known as "buck and wing" dancing. The "wing" referred to is the step where a foot is kicked out to one side, striking the ground as it goes.
Clog dancing traditions still exist in some festivals in Northumberland, and are danced to the traditional music of the area. Clog dancing is also still practiced in parts of Lancashire, Cheshire, Yorkshire, Cumbria and Derbyshire and there are teams dancing the Northern traditional dances (and newer ones) in many other parts of England.
Industrial Revolution and after
Clog dancing was a common pastime in 18th century England.

It is thought to have developed in the Lancashire cotton mills where wooden-soled clogs were preferred to leather soles because the floors were kept wet to help keep the humidity high, important in cotton spinning.

English clog dancing started in the Industrial Revolution. Workers sitting at the weaving machines wore hard-soled shoes, which they would tap to the rhythms of the machines to keep their feet warm. At their breaks and lunches, they would have competitions, where they were judged on the best rhythm patterns. In later years of the Industrial Revolution
they clog-danced on proper stages at competitions. In these competitions, the judges would watch the routine and judge it according to footwork, precision, and technique.
United States

Clogging is the official state dance of Kentucky and North Carolina.
Antecedents
In the U.S. team clogging originated from square dance teams in Asheville, North Carolina's Mountain Dance and Folk Festival (1928)[4], organized by Bascom Lamar Lunsford in the Appalachian region.
American Clogging is associated with the predecessor to bluegrass-—"old-time" music, which is based on Irish and Scots-Irish fiddle tunes. Clogging developed from aspects of English, Irish, German, and Cherokee step dances, as well as African rhythms and movement. It was from clogging that tap dance eventually evolved. Now, many clogging teams compete against other teams for prizes such as money and trophies.

]Terminology
Solo dancing (outside the context of the big circle dance) is known in various places as buck dance, flat-footing, hoedown, jigging, sure-footing, and/or stepping. These names vary in meaning from place to place, and dancers do not always agree on their use. The term 'buck', as in buck dancing, is traceable to the West Indies and is derived from a Tupi Indian word denoting a frame for drying and smoking meat; the original 'po bockarau', or buccaneers were sailors who smoked meat and fish after the manner of the Indians.[5] Another source states that the word "bockorau" can be traced to the "Angolan" word "buckra', and was used to refer to white people, which is disputed. Eventually the term came to describe Irish immigrant sailors whose Jig dance was known as 'the buck.'"

One source states that buck dancing was the earliest combination of the basic shuffle and tap steps performed to syncopated rhythms in which the accents are placed not on the straight beat, as with the jigs, clogs, and other dances of European origin, but on the downbeat or offbeat, a style derived primarily from the rhythms of African tribal music.
Buck dancing was popularized in America by minstrel performers in the late nineteenth century. Many folk festivals and fairs utilize dancing clubs or teams to perform both Buck and regular clogging for entertainment.

Traditional Appalachian clogging is characterized by loose, often bent knees and a "drag-slide" motion of the foot across the floor, and is usually performed to old-time music.

]Competitive clogging
The clogging competition which many cloggers call the Clogging Capital of the World[citation needed], is held in Maggie Valley, North Carolina, and has been hosting competitions for many years. An even larger competition takes place at Lagoon in Utah. This competition is held by America On Stage and is considered to be the largest dance competition in the nation.

Modern competitive clogging, also called precision clogging is inspired by traditional styles but performed to a wide variety of music, including bluegrass, modern country, rock music, pop, and hip hop. Today competitive precision clogging has several sanctioning bodies that oversee competitions held throughout the United States, with the majority located in the southeastern states. Also the style has evolved from flat foot to dancing on the balls of the feet. Toe stands are a recent adaptation from other dance forms. These high-energy styles have opened the forum to a wide audience with hundreds of workshops and competitions every year.
Fusion, or the adding of new styles into another, has affected clogging in recent years. Fusion has brought popularity to clogging as well as greater recognition.[citation needed]
Clogging shoes are often black, white, or black and white. Some people feel that white shoes are better at attracting attention from an audience.[citation needed] Clogging shoes generally have taps that are double taps or "jingle taps". This makes it so there are four taps on each shoe—-two on the toe, and two on the heel. One is securely fastened to the shoe, while the other is more loosely fastened and hits both the floor and the fastened tap while dancing or simply walking about. Cloggers with this type of tap can be heard on carpet as well as hard surface floors.

One more recent example of clogging is the popular dance show America's Best Dance Crew on MTV, where Dynamic Edition danced their way through the 3rd season, all the way to 5th place.
Green Grass style clogging is a relatively recent style of Appalachian "folk clogging" developed by and associated with the Green Grass Cloggers of Greenville, North Carolina (and later also of Asheville, North Carolina). They began in 1971 as students at East Carolina University in Greenville. Their style is not traditional flatfooting, nor is it traditional mountain-style clogging, or contemporary precision clogging, but it is a form of precision clogging in the sense that it features choreographed routines where the dancers are all dancing in unison (same steps at the same time), while moving through figures. The figures are taken from western square dancing, rather than from traditional southern Appalachian dancing. It is usually performed to old-time music. Although Ira Bernstein was never a Green Grass Clogger he started with a group called the Mill Creek Cloggers, which were a copycat group to the Green Grass Cloggers. He was later a member of the Fiddle Puppets, who were a splinter group of the Green Grass Cloggers, as three of the four original Fiddle Puppets were former early Green Grass Cloggers. When he first got into Green Grass style clogging during his time with the Mill Creek Cloggers, Bernstein was heavily influenced by the Green Grass Cloggers and would meet up with them at festivals, parties, and dances.</ref>
Netherlands

.
In 2006, nearly 500 teenagers attempted the "Guinness Book of World Records" bid for the largest number of clog dancers.It took place in The Hague. They were dancing the ballet version of the Dutch clog dance rather than the folk version. The ballet "La Fille Mal Gardée" contains a well-known clog dance. For this specific dance the choreography was created by Stanley Holden (1928–2007), though Frederick Ashton took overall responsibility for it. 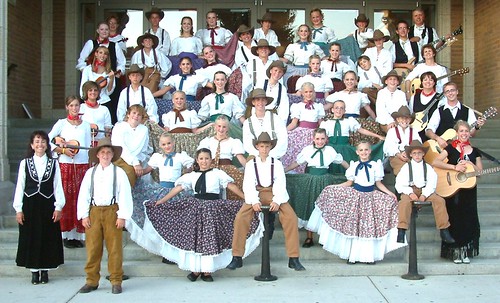 Here they are - the one and the only Greengrass Cloggers, as crazy in their dotage as when they were Asheville hippies recruited to save the old-time mountain clogging, and instead took it over...