Borat and all his stuff

all across the universe :: Music :: Alternative

Has The Dictator's Sacha Baron Cohen been banned from the Oscars?

Deadline blog reports that the Academy has pulled Cohen's tickets until he promises not to appear at the awards as his latest alter ego, but Oscars organisers deny they have banned him 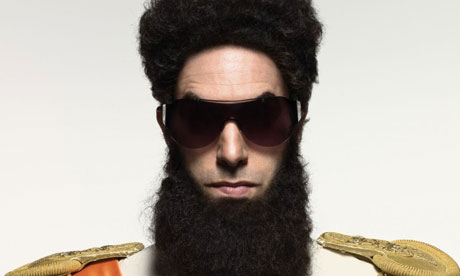 Costume drama ... has Sacha Baron Cohen been banned from the Oscars over his plan to turn up as the Dictator? Photograph: Moviestore/Rex Features

Sacha Baron Cohen has reportedly been banned from Sunday's Oscars over his plan to appear as the Dictator, his latest alter ego and the subject of a forthcoming film.

The Deadline blog says the Academy of Motion Picture Arts and Sciences has pulled Cohen's tickets for the event until it receives a promise that he will not turn up in character as the Saddam Hussein/Muammar Gaddafi-style autocrat. "Unless they're assured that nothing entertaining is going to happen on the red carpet, the Academy is not admitting Sacha Baron Cohen to the show," studio Paramount told the site.

Oscars organisers later denied they had imposed an outright ban on Cohen. "We haven't banned him," an Academy spokesperson told The Hollywood Reporter. "We're just waiting to hear what he's going to do."

However, Deadline said it was sticking to its story: "The fact is that, this morning, the Academy's managing director of membership Kimberly Rouch phoned Paramont's awards staff to say Baron Cohen's tickets had been pulled unless he gives the Academy assurances ahead of time promising not to show up on the red carpet in costume and not to promote the movie on the red carpet," its report read. "The Academy made it clear that, without those assurances, it would not issue him the tickets. So he's banned."

Suggestions that Baron Cohen was planning some sort of stunt emerged yesterday. The comic has a history of making dramatic appearances at high-profile events: in 2009 he was lowered bottom first on to an apparently outraged Eminem (the rapper was later revealed to be in on the joke) while dressed as flamboyantly gay Austrian fashionista Brüno at the MTV Movie awards. He was invited to present an award at the Oscars in 2007 but opted out after being refused permission to do so while dressed as Borat, his earlier and perhaps best-known creation.

The Academy had invited Baron Cohen this year as part of the ensemble cast for Martin Scorsese's 3D fantasy Hugo, which is up for 11 awards. However, organisers have long been keen to discourage attendees from promoting their upcoming ventures: the body has only just begun to allow adverts for new films to be shown during commercial breaks for the Oscars telecast.

The Dictator, described as "the heroic story of a dictator who risked his life to ensure that democracy would never come to the country he so lovingly oppressed", is Baron Cohen's third collaboration with Borat and Brüno director Larry Charles and hits cinemas in May. The 84th Academy Awards are due to take place at the Kodak Theatre in Los Angeles on Sunday, with Billy Crystal hosting for the ninth time.

kitschy but so﻿ strong!
- One﻿ needs a lot of talent to make such a kitsch and a heart/soul...

(even though her eyebrows were more compelling in the first clip

why did you mention Dolly Parton
she sang that one also?
or is it the kitschy thing?

pinhedz wrote:I should have started with the true star of Bulgarian Idol--Valentina Hasan with her rendition of "Ken Lee, tulibu dibu douchoo..."

I remember a song I used to sing as a child, it's was a Queen (the band) song for FCBarcelona stadium Camp Nou... camp nou I want to break free

oops
thought it was whitney's

all across the universe :: Music :: Alternative