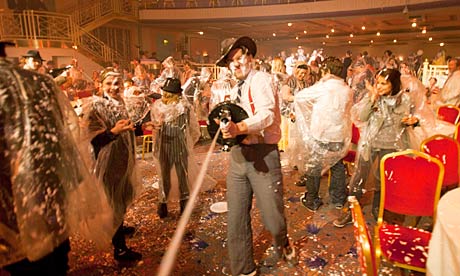 Families take part in the splurge gun scene in Bugsy Malone at the Troxy in east London. Photograph: Graham Turner for the Guardian

Down an east London side street, a heavily made-up blonde wearing a cloche hat, figure-hugging skirt and fur shrug slinked down a snaking queue. "So," she drawled, stopping in front of a group of anxious men. "How ya doin' fellas? My name's Tallulah."

Nearby, a news hound questioned a couple about a recent splurge gun attack, while a dancer with an accent that seemed to have arrived in Chicago via the home counties asked a little boy if he was local, or from the Bronx. "I'm from Chiswick," he said quietly, a little perplexed.

In the Good Friday sunshine hundreds of parents and children in 1920s garb queued to get into Fat Sam's Grand Slam for a film screening with a difference.

Part of a new craze for interactive entertainment, this showing of Bugsy Malone – featuring performers, a Prohibition era speakeasy and "the biggest splurge and custard pie fight ever staged" – is the first Future Cinema event to be open to children.

"We want kids to be mesmerised and have a magical experience rather than a trip to the multiplex," said Fabien Riggall, creative director and founder of Future Cinema. "When I was a child I wanted to be in Bugsy Malone and I fancied Tallulah. We want these children to feel like they are stepping into the film."

The children attending had little difficulty getting into character. In the basement of the 1930s Troxy cinema in Limehouse two children shadow boxed in a mock up of Cagey Joe's gym, as a besuited boy, no older than eight, gave a running commentary. Further into the speakeasy children in flapper dresses and trilbys gathered around a poker table.

Riggall said the growing popularity of the events – the first screening in 2003 had 400 viewers while the last film attracted 19,000 over six weeks – reflected a cultural restlessness.

"People are bored, they are looking for new experiences whether it's a pop-up shop or a supper club," he said. "A lot of the romance of going to the cinema has been lost. We want to create something that is communal and social and brings you deeper into the film."

There is little choice but to get involved. Cornered in a basement laundry by a fast-talking, sharp-suited Dandy Dan, the Guardian's attempts to explain what it was doing were roundly ignored. "Now you listen to me," said the match-chewing gangster. "You do what I say or you'll get whipped so hard you won't be able to sit down for a week."

Inside, parents appeared conspicuously more excited than their offspring. Dressed in a 1920s flapper frock and pearls Tanya Beadle admitted she had dragged her kids along for her 43rd birthday, after bringing her mum for Mother's Day. "Shamefully, I booked it myself," she said. "I can't think of anything I'd rather do. It's the only place I've been where people totally lose their inhibitions."

People are looking for new ways to interact and experiences that break down barriers, agreed Marie McCloud, 31. "I live in the East End and there is a still a community among the older people, but I think there is definitely a younger generation that wants to pull together – and maybe this is part of that."

As the film drew closer to its splurge-filled finale, it was interrupted by a warning to don plastic ponchos left under seats, resulting in widespread panic and excited squeals from children and parents alike. Paper plates were loaded with foam, the meek-hearted took cover under tables and as the splurge started to fly onscreen, pandemonium and mass hilarity ensued below.

After the last pie had been thrown and the final strains of You Give A Little Love faded away, the Wood family – exhausted, but happy – gathered up their belongings to travel back to Lewes in East Sussex. Astrid, nine, in cloche hat and fitted coat and carrying a leather suitcase, was suitably impressed. "I wouldn't change anything about it. It was just like being in the film," she said. Looking around at the emptying 1930s auditorium she sighed, and added: "I wish there was a real Fat Sam's."