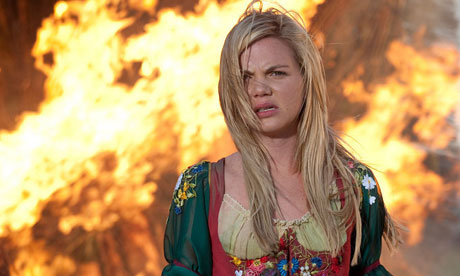 Britannia Nicol in a still from The Wicker Tree

Though it was the victim of a takeover at its film company when it was first released in 1973, and earned its director Robin Hardy just £5,000, The Wicker Man has become a cult classic.

The story of a Scottish policeman investigating the disappearance of a girl among a pagan community in the Highlands, it has inspired an academic conference, a musical, several parodies, "singalong" screenings across the country, songs by Pulp and Iron Maiden and a disastrous 2006 remake directed by Neil LaBute and starring Nicolas Cage.

In 2010 the Guardian listed it as the fourth greatest horror film of all time. Now, 39 years on, Hardy has released The Wicker Tree, which revisits the territory he explored to such disturbing effect. Having played at some festivals in the US last year, it made its UK debut at FrightFest last August. It was shown in three cinemas in Scotland over the weekend.

"It's been very well received," Hardy, 82, told the Guardian, though on the Rotten Tomatoes site, which aggregates reviews, it has a poor rating of 22%.

"The New York Times's reviewer said it wasn't as gritty as the original Wicker Man but it's a thousand times better than the remake. I was quite happy with that."

The Wicker Tree tells the story of two young Texan evangelists going to a Scottish border village to preach the gospel, with an outcome that will surprise no one who has seen the original.

Hardy said the adherence to the formula was deliberate. "The Wicker Man has quite a lot of songs in it, jokey bits, sex, and a very horrific ending. That's more or less the format of the new film. It's a sequel in terms of genre but not in terms of the casting or plot."

"He was going to take one of the lead roles but then he went to Mexico and injured his spine," said Hardy; Lee had tripped over a cable on a film set. "He couldn't stand for more than five minutes without being in acute pain. I devised a little scene which he does excellently."

"I watched it with a certain amount of schadenfreude, that they could have made such a mess of it," he said.

The Wicker Tree was shot over seven weeks in 2009 just outside Edinburgh on a budget Hardy says was "between $10m and $15m", though a set report at the time put the budget at $3m. Finding a distributor took longer, owing to the lack of famous names and the difficulty in categorising the film. There will be more screenings in cinemas around the country before the film is released on DVD at the end of the month.

The original film was first shown as the first part of a double bill with Nicolas Roeg's Don't Look Now, eventually finding fame through late-night TV screenings. Hardy denies being disappointed that The Wicker Tree will not get a full theatrical release.

"Ninety per cent of small British films go straight to DVD," he said. "I am opening the film all over the place for relatively short runs. If the [cinema] run is too long the distributors feel they're losing DVD sales. On the other hand they want to get reviews, so they hit as many cities and university towns as possible because [The Wicker Man] is taught in universities and schools. It's rather an unorthodox form of distribution but I think it's rather common these days."

The Wicker Tree avoids the lashings of gore popular in modern horror. "They're gore engorged," said Hardy. "If you don't spill quarts of blood during the first five minutes you somehow haven't got there."

The original film was famous for an extraordinary naked dance by Ekland's character (though she used a body double). Perhaps taking account of modern sexual mores, Henry Garrett, who plays one of the missionaries, is the subject of The Wicker Tree's lingering bum-shot as he wades into a lake, while Honeysuckle Weeks, best known as Samantha Stewart on ITV's Foyle's War, spends much of the film in a state of undress.

Despite this, it seems unlikely that The Wicker Tree will replace The Wicker Man in the hearts of film fans – or even Hardy. Asked whether he preferred the new film, he replied: "No, I really don't."

He is currently planning a third film in the trilogy, called The Wrath of the Gods, "where the gods get their comeuppance. I'm looking to set it in the Shetlands".

Writer and actor Mark Gatiss featured The Wicker Man in his BBC4 series A History of Horror, and said the original film's magic was always going to be hard to recapture. "It's a brilliant idea which is thrillingly scary. The island setting and the queerness of that sort of British folklore you completely believe and buy into.

"History's littered with remakes of films like Get Carter and The Italian Job. People go 'Why are you doing this?', it's released, everyone says 'Why did you do that?', it disappears and everyone goes back to the original because they're brilliant." 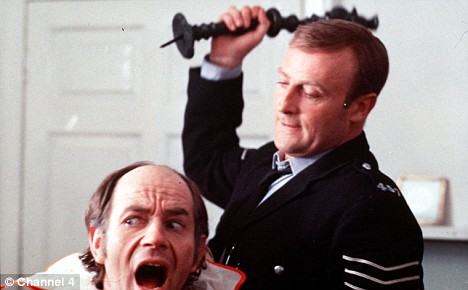