The actor talks about his family 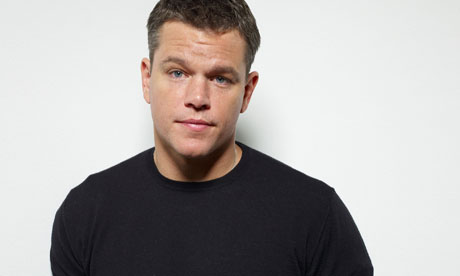 Matt Damon: 'We have a two-week rule – we can't be apart as a family for longer.' Photograph: Matt Carr/Getty Images

I didn't grow up with great privilege, nor did I grow up wanting for anything. I was a middle-class kid and, relative to the rest of the world, that's great wealth. As a parent, I think the question is, how do you raise any kid with a true understanding and context of what kind of life they have versus what kind of life other people have? It's a constant struggle no matter who you are.

My wife and I have a one year old, a three year old, a five year old and a 13 year old. All daughters. One of the reasons we live in New York is because, without having to explain things to the girls, they can walk around the streets and just by looking around them see that the world is composed of all different people from different walks of life, different languages and different socio-economic backgrounds. They pick it up through osmosis. Eventually I plan to take them on some of the trips that I go on to developing countries. That's what my mother did with me when I was a teenager.

When I was 15, 16, 17 we used to go backpacking across Mexico and Guatemala. We would begin by doing a language school course. They work by immersion therapy – you go to school for six hours a day and then you go home with a Mexican family. Spanish is the only language spoken. After a couple of weeks, we'd be ready to take a bus and travel around the country. I remember travelling on buses stuffed with chickens. Being from Boston, I'd never seen stuff like that and I'd never seen poverty like I saw there. The way people live out in the country. They are very poor, living in shacks – it's a type of poverty you don't really encounter in the north-east of America.

My parents divorced when I was young but I was brought up in two really loving households. I didn't have a contentious relationship with my mom or dad. I am not quite sure why but I never felt the need to lie to them. I never hid anything.

My mother is a professor of early childhood education. When I was two she would say she knew I was going to be an actor. And that she knew that my brother was going to be an artist: he's a painter and sculptor. She could see from the way we played and what we were drawn to. My kindergarten teacher used to say to her I can't get him out of the dressing-up area. My mother would say: "That's fine – leave him there." I was trying on every costume and role playing! My parents said: "We want you to act if that's what you really want to do. But why do you want to do it professionally? Do local theatre. Acting professionally will only interfere with going to college. Why are you so impatient?"

My wife is my soul mate. I can't imagine being without her. Being a parent, as any parent knows, is a lot of work whether you are together or not. Our 13 year old is terrific, and she's a big help, but with the other kids it's just non stop. We like to do a lot of the family stuff together, particularly when we get them to school in the mornings. It starts at 6.30am. Once you get them off to school there's always a sigh of relief. Then we have one hour where we can go and get a cup of coffee together.

Before I had kids I remember Don [Cheadle] saying to me that one of the great things about being an actor is that when you're not working you can be there in a way that most dads can't. And it's true you can be there 100% of the time – with everything.

We have a two-week rule – we can't be apart as a family for longer – and so far we haven't gone beyond a week. I am doing a movie in Vancouver at the moment and I get a red-eye flight Friday night then on Sunday night I catch the red-eye flight back so I get back to Vancouver at 1.30am. Then I sleep and go to work at 5.30am. It's brutal. The good news is that the kids know that I'm going to be home every weekend. As they are waking up on Saturday morning, I come through the door.

A few years ago, I got offered a movie with Clint Eastwood [Invictus]. It was always my dream to work with him, but it was seven weeks in South Africa in the middle of the school year. My wife and I figured out that if we flew Alexia's [his eldest] class of 10-11 year olds out there for a 10-day trip, with the school holidays, we could take Alexia out of school for a week on either side of that trip and I would only be away from her at the beginning and end of the shoot. I sorted it out with the school six or eight months beforehand. I said: "If I offer this trip to x number of students can you do something on Nelson Mandela?" So I left for Invictus and the family came a few days later with Alexia and all her classmates. They did a whole Mandela mini course. They went to the townships and Robben Island. It was a worthwhile trip – and it meant that my family would only stay apart for a short amount of time. As long as the trip didn't cost more than I was being paid for the movie, it was a good deal for me.


The way I feel about my family wasn't something I expected. I knew I was going to love being a father and a husband. People who were already parents would tell me: "It's great!" "It's wonderful!" But I don't think you can really appreciate it until you experience it for yourself. It's really quite something.


• We Bought A Zoo is in cinemas now

Are you, by any chance, a Matt Damon fan who believes in family values?