Morgan Spurlock: 'I wasn't the best looking kid – I was just tenacious'

At one of his regular New York haunts, the film-maker explains why he loves risk-taking and the British sense of humour 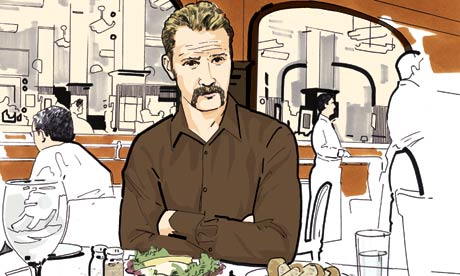 Arriving at Balthazar in New York's SoHo, there is a lunchtime crowd hovering near reservations, a combination of wide-eyed tourists who want a glimpse of real New Yorkers, and the pushy New Yorkers who want to avoid the tourists. Being a pushy New Yorker, I squeeze my way to the front. I mention Morgan Spurlock and the maître'd nods. "Yes," he says, handing over menus to the hostess. "His table is ready."

I follow the hostess through the cavernous room which is modelled after a Parisian café – deep red banquettes and shiny brass rails. I'm told Spurlock likes the large, circular booth and yes, he comes in often. Later, he'll explain his emotional connection to Balthazar; it's where he celebrated the success of Super Size Me, his 2004 documentary about living only on McDonald's for 30 days, which was nominated for an Academy award.

"I've had everything on the menu at least once," he says. "It's a Monday, though, so I probably won't get the brook trout."

He doesn't like to eat fish on Mondays and believes superstition is rooted in some sort of fact.

"I'm a believer in getting fish on Tuesday. I like fresh fish. The fish market isn't open on Sunday so where's it coming in from?" He quizzically raises an eyebrow. I enquire if that's being smart or neurotic.

Thus begins a lively conversation where it's evident that Spurlock is as accessible and entertaining in person as he is in his films. Known primarily as a documentary filmmaker, his most recent, The Greatest Movie Ever Sold, is a film about product placement, and he combines a campaigning point of view with an engaging narrative. What's appealing about him on camera is what comes through in person: heartfelt enthusiasm.

He grew up in West Virginia, "in a house where there was a dead animal on the table at every meal". For his mum's 70th birthday he's taking her and the family to Tuscany and he's close with them all. "We just don't talk about religion or politics," he says. He has a five-year-old son with his ex-wife and explains having a child has forced him to let go of a lot of his need for order: "You reach in your pocket and there's a Lego toy or a half-chewed piece of gum." He unpacks immediately when he gets to a hotel because he hates living out of a suitcase.

The waiter approaches and recites the specials of the day. Spurlock says "great" after all of them. Then he includes the waiter in our debate about fish on Mondays and asks for his thoughts. I decide to risk the brook trout. "It's a good risk," Spurlock reassures me. "Go for it." He orders the chicken paillard.

Last year he was travelling for seven or eight months. While on the road, he eats whatever he wants but is adamant about exercise. He won't stay in a hotel that doesn't have a fitness centre or pool and he never eats at an airport. There's a sushi restaurant at JFK which elicits a shiver of horror. But lately he's been enduring a weekly transatlantic commute while shooting a Sky Atlantic show – Morgan Spurlock's New Britannia – which highlights the differences in British and American culture. It's a chat show with field pieces driven by Spurlock's role as an outsider looking in. He credits his mother for his affinity for British humour. "I have an amazing mom who brought me up on a fantastic diet of comedy," he says. "Monty Python. Fawlty Towers."

Another attractive facet of making a show in the UK is owning the intellectual property rights. Financial independence is important to Spurlock. "I paid for Super Size Me out of my own pocket," he says. "I made it for $65,000."

Why so inexpensive? I ask

"Because nobody got paid. We had a crew of 40 people and nobody made a dime over the year of making that movie. We had deals where they would get back pay."

That he could get so many people to agree to get involved on the basis they would be paid eventually is a clue to the tenacity that characterises much of his success, right from the start, when he was involved with the early days of the dotcom boom. He tells a story from those days, of how he met an investor who wrote him a cheque for $250,000 in a bar on the Upper East Side.

A month later, in 2000, he launched I Bet You Will, an internet show where people were paid to perform outrageous acts, such as drinking vast amounts of cod liver oil – and then he sold it to MTV. He was sleeping in a hammock in his office at the time but always believed the show would be a success.

Spurlock is clearly savvy in his approach to working in a creative industry but was he always so optimistic? And where did it come from? He credits his parents.

"I think the minute you start doubting, that doubt is contagious and everyone starts believing it won't happen. You have to inspire faith in people, especially when they're not getting paid. The one thing I never saw my father do in the midst of failure was quit. I don't ever remember seeing him depressed. I was never allowed to quit anything – once you started, you carried it through to the end. Period. So I think as I was $50,000 in debt and evicted from my apartment, I was going to see it through until the end."

Spurlock became "enraptured" by the entertainment business from a young age. "I never wanted to do anything else," he says. "I was awkward as a kid. I wasn't the best looking or the most athletic or the funniest – I was just persistent and tenacious."

He also keeps every rejection letter that he's ever received in a folder. He looked at it recently and realised that it even contains a note from an agent who would later change his mind and sign him. When was the last time Spurlock suffered rejection?

"Well, I just got divorced." He laughs. "I get rejected all the time. There are lots of ideas I'm passionate about that no one wants."

We order coffee and the dessert menus are placed in front of us.

"Want a creme brulee?" He asks. "It's pretty bananas."

"You don't want dessert? Trying to watch your figure? I don't eat dessert."

Ever since Super Size Me, he's been susceptible to weight gain. "Once you develop those fat cells in your body, they never go away." He imitates fat cells talking: "Go on – have another dessert buddy – go ahead!'

Spurlock never tires of talking about food. His favourite meal was in Japan in 2005: "4am at the fish market. There are little sushi restaurants. I got in line at 5.15 – I was eating the freshest fish I ever had in my life. I bit into a sea urchin that felt like someone had just plucked it out of the ocean."

Before we leave he mentions a project called Failure Club that he's nurtured for seven years. It's now showing on Yahoo.com and a new episode launches every Tuesday and Friday. The show focuses on people who finally do the one thing in life they were most afraid of failing at. It's a concept he's excited about exploring.

"People get scared and stop going after things they want. We stop taking chances. We become risk averse."

Embracing fear and taking risks come easily to Spurlock. Just don't ask him to have fish on Mondays.