He's one of Hollywood's heaviest hitters, who's played everything from cult figures to cold killers. On the eve of his latest film, the Oscar-winner talks about transcending race, his 'empty nest' and why he goes boxing five mornings a week 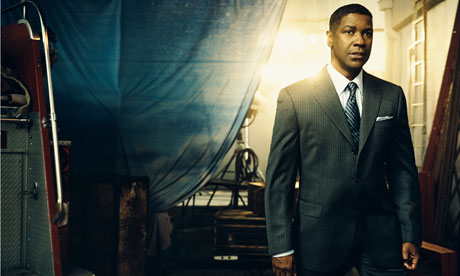 Denzel Washinton: 'I’m a logic monster. If things don’t make sense, I gotta make sense out of them' Photograph: Trunkarchive.com

Nearly four decades ago, Henry Fonda appeared on Michael Parkinson's TV chat show and gave his audience an insight into the power of casting. Reminiscing about his role in the violent epic Once Upon A Time in the West, Twelve Angry Men's quintessential good guy recalled the film's opening, in which a farming family is massacred; it worked so brilliantly, he said, because the director knew that the minute the camera pulled away from the victims' corpses to reveal the perpetrators, cinema-goers would gasp: "Jesus Christ! It's Henry Fonda!"

A similar frisson of disbelief comes into play when you see Denzel Washington efficiently breaking an assailant's neck at the start of his new film, Safe House, in which he plays a ruthlessly effective CIA agent turned traitor, and builds throughout the narrative as he mounts a campaign of creepy resistance against Ryan Reynolds's terrified rookie, who's charged with bringing the renegade back on to the grid. Fine: he might have played monsters before, most notably rogue cop Alonzo Harris in Training Day, for which he won the Oscar for Best Actor in 2002, and in American Gangster. But it's a slew of quite different roles that really made Washington a household name: as political activist Steve Biko in Richard Attenborough's Cry Freedom; as a former slave in the Civil War drama Glory, for which he won his first Oscar, for Best Supporting Actor; as the lawyer who represents Tom Hanks in Philadelphia; and as Malcolm X in Spike Lee's eponymous film, for which he received another Oscar nomination. They're all very different roles, of course, but they have something in common: they require an actor who can convey unwavering belief that will endure to the point of self-sacrifice.

When I meet him, in the blandly posh surroundings of the hotel to which he's been brought to publicise the film, Washington explains his choice of roles with the simple insistence that he likes variety – that he doesn't want to get pigeonholed and that he'd be "bored to tears" by repeating his performances. Exceptionally polite and affable, he's happy to answer a string of questions both thoughtfully and with puckish good humour. But he does pause to contradict me – gently, mind you — when I call Safe House an action film. He doesn't like labels, he says, although he thinks it's a bit more of a thriller than a pure action movie; in his preparation for the role he spent a lot of time reading up on sociopaths in order to reproduce their talent for manipulation and remorselessness.

It's a professional answer, and professionalism oozes out of him. But I wonder if he has something else invested in his versatility. When he won the Best Actor Oscar for Training Day, he was the first black actor to have done so since Sidney Poitier in 1964; in the five years following Washington's victory, both Jamie Foxx and Forest Whitaker won the award. Both their characters – Ray Charles and Idi Amin respectively – could only have been played by black actors; not so Alonzo Harris. You could argue that what Washington has done, by increasingly mixing portrayals of iconic figures with blockbuster roles, by switching between heroes and villains, is to expand the palette available to black actors beyond all recognition. 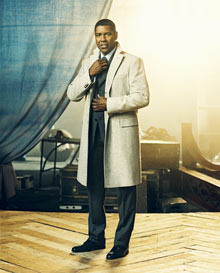 'I’m an independent. I assess the situation and I try to make an intelligent decision.' Photograph: Trunkarchive.com

When I ask him whether he thinks his Oscar win shifted things – for himself and others – his first response is modesty. "You have to have a part to play, first, that's the bottom line," he replies. "You don't get nominated unless you have a great role to play and you interpret the role well. So maybe it shifted voters' attention to what certain African-Americans were doing. What Jamie Foxx did in Ray was phenomenal, it couldn't be denied. I think Forest winning was a bit more of a surprise. Jamie was almost a phenomenon – he was Ray. The fact that I'd won a couple of years earlier, maybe that did help for white voters to say: 'Hey, look at Jamie Foxx over here,' when they may not have prior to that. I don't know. But maybe… maybe."

I tell Washington that I recently interviewed Viola Davis, with whom he starred on Broadway in August Wilson's Fences in 2010, and explain that she spoke with great eloquence and force about the barriers facing African-American actresses in Hollywood. Does he agree? "Black or white, there seems to be a cut-off for women. Don't have a couple of kids; you're out the door. They're constantly looking for the younger one, the younger one, and for African-American women, women of colour, it's doubly hard. And then for dark-skinned African-American women, it's even more difficult. My daughter is studying acting, and she's brown-skinned, dark-skinned, and I tell her: 'Watch Viola. And get on the stage and learn to be the best actor you can be, so that you'll always work, you'll be able to go from stage to television to movies.'"

It's advice he's clearly taken himself, working his way up through theatre and small television and film roles until he landed a part in the hospital drama St Elsewhere in 1982. A native New Yorker, he relocated to Los Angeles to do the show, initially for a 13-week stint. But St Elsewhere stuck, and so did he, even though he says, smilingly, that "I never considered myself an LA person – I was visiting with a job". Now, with their four children grown up, he and his wife, actress Pauletta Washington, divide their time between California and their apartment in New York City. Washington, who has always emphasised his commitment to his family and kept a distance from Hollywood celebrity razzmatazz, now finds himself presiding over a semi-empty nest, which causes him to laugh ruefully: "My wife is going back to work, so, like, last year she was in New York six months out of the year. I was like: I can't get a meal round here, I'm sitting in this big house by myself, nobody is around, this is crazy! That's what it's become!"

He seems unlikely to run short of things to occupy himself, especially now he's just as keen to produce and direct films, such as Antwone Fisher and The Great Debaters, as he is to act in them. Even when he's not behind the scenes as well as in front of the camera, he plays a central role in a film's development, working intensively with writers and directors to get the role just right: "Over the years, I've done that more and more. Training Day, that character was nothing like it ended up being – it was more like a Lethal Weapon kind of guy, a beer-drinking kind of guy. Antoine Fuqua [the director] brought the whole gangster element to it, and we developed it and improvised a lot… Nine times out of nine the script is not there, to my liking. And I'm a logic monster. If things don't make sense, I gotta make sense out of them, and you get into the process." He has script approval on each movie he makes, and points out that "the other side of that is: how can I say anything about it if I haven't done anything about it? So you start getting in there, and I like that part."

That sense of commitment to every project he works in – even, as with Safe House, if it's essentially an entertainment – comes through loud and clear. You could trace it back to a childhood that radically altered course when his parents divorced and his mother sent him to a boarding school, a decision that he credits with keeping him away from the streets, which claimed so many of the boys he grew up with; and to his deeply held religious beliefs, which have had him, on occasion, query whether he ought to have been a preacher, like his father.

Whatever combination of nature and nurture shaped him, Washington exudes a very calm, quiet self-possession. I bring up his political views, remarking that he's been seen as a high-profile supporter of Barack Obama. "Have I?" he asks, an eyebrow raised. "I've never said much at all about that. They saw me at the inauguration. I voted for him… I'm an independent. I assess the situation and I try to make an intelligent decision. I will do that again."

He is similarly phlegmatic about other of his personal attributes. In Safe House, his character goes on the run and hooks up with a forger who hasn't seen him for a long time. "It's the black Dorian Gray!" cries his friend, a semi-comical reference, I thought, to both the character's and Washington's extreme youthfulness; now 57, he could pass for a man in his early 40s, and one in good shape at that. I ask him whether that moment struck a chord. "I didn't think too much about it," he replies, closing the discussion in friendly but quite deliberate manner.

Between films he boxes five mornings a week, although just as much to keep a sense of purpose as to keep fit. "It's therapeutic for me. It's tricky, especially in LA, for an actor, and for a successful actor. Everybody else gets up and goes to work in the morning. So you need to make work. You can start sleeping later and later and staying up later and later, and not being a part of the world. I thought I wanted to do that for a while, I tried that for a while, for about eight months maybe 12 years ago, and I thought: OK, this is not for me; I need to stay busy." When he is working, though, he's disciplined about making sure that he leaves his character on set, a practice he says he learned from reading James Cagney's autobiography: "I'm not riding home from work in character – I'm looking out the window at the seaside," he laughs.

He says he doesn't have a favourite among his films; he always answers "the next one". At the moment he's "hovering" around a comedy, having not done a great many of those in his career (although, he jokes, "I've done some that have turned out to be tragedies!"). The role he'd really like to play is that of jazz legend Thelonious Monk; he has a script, and ponders that "I'm talking about it more, so maybe I'm talking myself into it." A few years ago he was heavily involved in a bestselling book in which famous people celebrated their role models and mentors, and I wonder whether he has any further literary ambitions. The answer, once again, turns attention away from himself and back to his work: "I'm not ready for any memoirs yet. The story's not told. Not yet. No. Too early. I'm living life – I don't want to write about it."

Safe House is released on 24 February