Brad Pitt on Moneyball, the Oscars – and giving up dope

Nominated for two Academy Awards, Brad Pitt's eccentric career is finally getting serious recognition. He talks about his love of obsessive characters, his acting highs and lows – and how he smoked himself into a doughnut 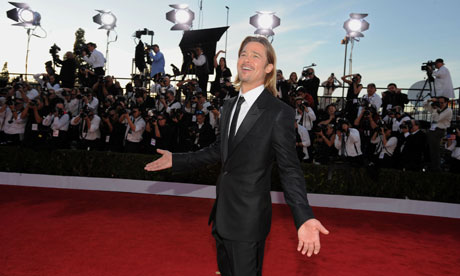 Brad Pitt pops his head through the balcony doorway and stage-whispers my name. He bounds round to shake hands and surveys the cauldron below that is Hollywood Boulevard. No fuss. No fanfare. No harried flunkies with clipboards listing the dos and don'ts. Just one of the most recognisable men on the planet in a black jumpsuit and sneakers. And me. And a bodyguard as tall as a sequoia outside the hotel room. "How ya doing?"

And then the deluge. I had heard of Pitt's lively curiosity, his passion for architecture, philanthropy, his catholic taste in reading material. I didn't know about the delivery system – a lava flow articulated in a deep, rural drawl: "Who lives there next to the hotel? How shall we arrange the chairs? Is that shorthand? You don't see that much. How does it work? Ask me anything."

If Pitt could somehow flit from place to place as easily as he does in conversation, life would be a lot simpler. In fact, mapping a route from point to point is a daily logistical conundrum. "My destinations are determined by parking lots," he says, fresh-faced, neat-goateed. Today, a warm Friday in late January, he has made the tinted-window dash from the nearby Hollywood Hills compound he shares with Angelina Jolie and their six children.

Three days before, Pitt, 48, received the third and fourth Academy Award nominations of his career, earning recognition as producer and star of Moneyball. The movie took six nominations in all, while Terrence Malick's The Tree of Life, in which he also stars, went home with three.

"We're so defined by the last success or the last failure that we even start to see ourselves that way," says Pitt. "You've got these awards and there's going to be one winner and four losers, but the four losers made great films. A subtle point of Moneyball is that we're a string of successes and failures. Odds are I won't have another year like this one for a while." 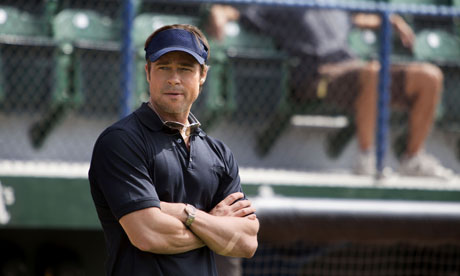 Let's hope the odds preclude another production history as tortuous as that of Moneyball. Based on Michael Lewis's book Moneyball: The Art of Winning an Unfair Game, the film recounts how baseball team Oakland A's general manager Billy Beane used unorthodox statistics to allow the struggling club to compete with the best. Steven Soberbergh left the project and it took Pitt, one of three producers, five years to get it up and running again. He is quick to praise Sony Pictures for its faith in the project. Uber-producer Scott Rudin is less circumspect. Pitt, Rudin said in a recent interview, "saved it single-handedly".

Why did he fight for it? "Well," he says, a lazy grin unfolding across his face. "I just worked on it for so damn long. I've been on that end of the experience a couple of times. The main character is a guy who's been devalued by the sport and is playing what he called an unfair game. And they go up against conventional wisdom and get called heretics in the process. At the end of the day this guy who's trying to win games is really trying to find his own values." He laughs. "Come on, man, that's good stuff."

When Pitt met Beane he discovered "a funny fucker, sharp as a knife", who shunned the limelight. "He reminded me of the characters I loved from 70s films. When I started in film I was taught that you had to have a character arc and there had to be an epiphany. As years go by I have found that to be utter bullshit. We don't really change; we evolve in degrees and what I love about these characters from the 70s like Popeye Doyle is they were the same beast at the end of the film as they were at the beginning. I do love obsessive characters. I get off on watching that." 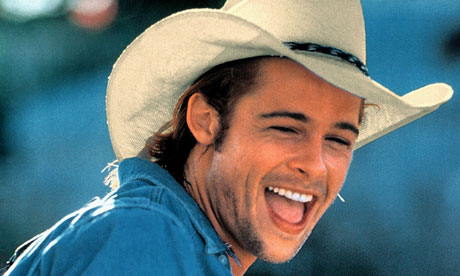 After Thelma and Louise, Pitt became a household name through a string of roles in A River Runs Through It ("the first time I felt pressure"), Kalifornia ("my first attempt at character work"), Interview With the Vampire ("I was miscast") and Legends of the Fall ("my first lead – they took a gamble on me"). Then he took a year off. "I was waiting to find something really interesting and that wait led me to [David] Fincher and Seven.

"Initially I'd read three pages of the script and put it down. A friend told me to finish it and I did and I met Finch and we were automatically talking the same language. When I got accepted to do Seven I had it written into the contract that the head stays in the box at the end. And that [Pitt's character] kills John Doe. When the premiere ended they flicked on the bright lights too quickly and people got up with this distasteful look on their faces and left. Finch and I looked at each other and said: 'What have we done?'" 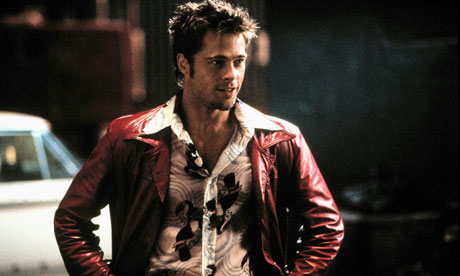 That same year Pitt earned his first Oscar nomination for supporting actor in Twelve Monkeys. "I think I was forced on Terry [Gilliam]," Pitt says with a coy smile. "I got the first half dead-on, but I flunked the second." He is more scathing about Meet Joe Black, which came out three years later in 1998: "I flatlined in that one." The reunion with Fincher on Fight Club in 1999 resulted in Tyler Durden, a suitably anarchic end to a tumultuous, star-making decade. "The story was so outrageous … that was just one of those rewarding experiences for all the other difficult ones that preceded it."

By the end of the 90s, Pitt was awash in the trappings of celebrity but says he hankered after greater focus and fulfilment. "I'd smoked a lot of weed. I was professional at it. I wasn't participating in life. I was smoking myself into a doughnut, a mollusc. I got disgusted with it." Then he quit marijuana. "At the end I came to the very simple conclusion that I wanted to make things and be a part of stories that were personal and that I could bring value to and if I got this opportunity, to contribute something to the zeitgeist of film-making."

The following decade continued to stimulate and, by and large, please the critics. There was a recurring role in Soderbergh's Ocean franchise, Troy, Alejandro González Iñárritu's Babel, Quentin Tarantino's Inglourious Basterds, the Coen brothers' Burn After Reading and a third Fincher film, The Curious Case of Benjamin Button, which resulted in Pitt's first lead actor Oscar nomination. His five-year marriage to Jennifer Aniston ended shortly after the summer 2005 release of Mr and Mrs Smith, where he met and fell in love with Jolie. "That was a monumental change for more reasons than one. Six plus one, to be exact. I think that film has merit, too. It's really good fun."

By the middle of the decade Pitt was flexing his producer muscles. "Instead of sitting there waiting for projects to come in, I wanted to start exploring stories that interested me." Pitt's new production company, Plan B, made its first deal, acquiring the script for The Departed, which would go on to win four Oscars, including Martin Scorsese's first for best director. 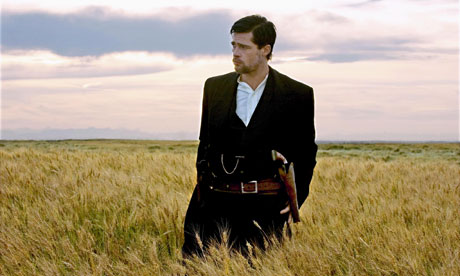 Pitt in The Assassination of Jesse James. Photograph: Allstar

Since then Plan B has produced, among others, A Mighty Heart, starring Jolie, Kick-Ass and The Assassination of Jesse James by the Coward Robert Ford, with Pitt in the lead. "Jesse James is absolutely one of my favourites, and I think the more it decants the better it gets," he says softly. "About three other people think that as well, but I think it's got legs. It's elegant. Andrew Dominik is a phenomenal director."

As Pitt pushes 50, his physicality remains, but gone is the mania from his earlier work, in its place a more contemplative kinship with the obsessive characters he seems to feel most affinity towards. Being a producer has allowed him to cheerlead work of personal relevance. Does he think he's a good actor? "I think I've become one," he says, adding that being a father of six has created the need "not to embarrass myself in front of my kids".

There are deep reserves of goodwill for Pitt in the industry and recognition that, with Moneyball and The Tree of Life, he has quietly solidified a mighty, eccentric career, one that has embraced with equanimity gems and howlers, box-office smashes and lo-fi treasures. "I'm very sporadic, but I think I've got some skills now. What I'm lacking is the weight of some of the actors I like and maybe I'll focus on that." He waits a beat, unleashes a killer grin. "I'm so damn affable, it's disgusting."