Some interesting insights in Michael Palin's Diaries into the making of Brazil- fellow Python Terry Gilliam was, of course, the auteur- in which Palin, uncharacteristically plays the bad guy.

Love Jonathan Price's central performance: one of my favourite actors.

https://www.youtube.com/watch?v=aErDEFpoD_0
Pryce is brought before his friend Palin to be tortured- Brazil.

'My most unappealing habit? Farting in small, enclosed spaces' 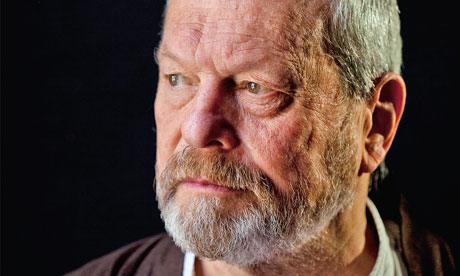 Terry Gilliam: 'Swamp gas, the smell of it brings back memories of my childhood in Minnesota.' Photograph: David Levene

Terry Gilliam, 71, was born in Minnesota. Having worked as an animator and strip cartoonist on Help! magazine in New York, he moved to the UK in 1967, where he began working on the children's TV show Do Not Adjust Your Set. In 1969 he launched the comedy TV series Monty Python's Flying Circus, with Eric Idle, Terry Jones, Michael Palin, Graham Chapman and John Cleese. The series spawned four movies, including Monty Python And The Holy Grail, which Gilliam co-directed with Jones.

When were you happiest?
Lost in a piece of music.

What is your greatest fear?
Any harm to my children.

What is your earliest memory?
Hallucinating with scarlet fever that the refrigerator in the next room blew up, killing my parents.

Which living person do you most admire, and why?
Maggie, my wife – for putting up with me.

What was your most embarrassing moment?
I've wiped it from my memory.

Property aside, what's the most expensive thing you've ever bought?
Anything over £5 is expensive to me.

Where would you like to live?
On the outskirts of a medieval village on a mountain overlooking the sea, with a funicular to the beach and a ski-lift to the slopes above and a level road to the shops. Where? Obviously in my imagination.

What would your super power be?
To fly a few feet off the ground.

What makes you unhappy?
Not being able to work.

If you could bring something extinct back to life, what would you choose?
The ability of a man to recite the entire Iliad and Odyssey.

What is your most unappealing habit?
Farting in small, enclosed spaces.

What is your favourite smell?
Swamp gas – it brings back memories of my childhood in Minnesota.

What is your favourite word?
Erudite

What is the worst thing anyone's ever said to you?
That I was a genius.

What do you owe your parents?
The forbearance they gave me.

What was the best kiss of your life?
With an orangutan on the set of Fear And Loathing In Las Vegas.

Which living person do you most despise, and why?
Jerry Springer – for encouraging the worst in people.

Which words or phrases do you most overuse?
Stuff and fuck.

What is the worst job you've done?
Cleaning out barrels that had contained salt beef.

If you could go back in time, where would you go?
The Renaissance in Italy.

How do you relax?
Building stone walls.

What single thing would improve the quality of your life?
The ability to delegate.

What keeps you awake at night?
Dreams.

What song would you like played at your funeral?
You mean I'm going to die?

How would you like to be remembered?
On my tombstone I want the words, "He giggled in awe."

What is the most important lesson life has taught you?
Don't die young. 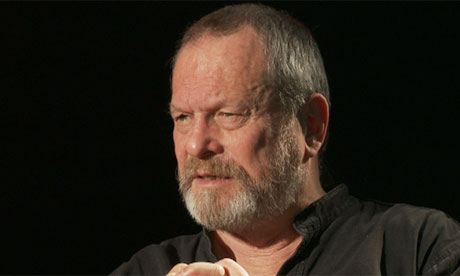 "We're in this position of having survived, with people interested in any new iteration of Python, and if we can squeeze any money out of our fans, we're quite rapacious..."

Tongue firmly in cheek, Terry Gilliam is referring to the two Monty Python apps released in 2012.

"iPads are here, apps are here: there's no way of being a Luddite any more! You have to go with the flow," says Gilliam.

"I'm impressed by both apps: the Holy Grail is very nicely done, with a lot of work put in to make it a nice-looking thing. And the iPhone app is really elegant – it's the way I want to see more of our stuff put out."

Gilliam doesn't have an iPhone himself, but he's borrowed one from Python Bytes developer Heuristic Media – co-founded by longtime friend and fellow filmmaker Richard Loncraine – to practise scribbling his signature on the touchscreen using a stylus, for its App Signing feature.

Gilliam and fellow Pythons Michael Palin and Terry Jones will be making use of that feature, as well as discussing the app, at an event in Apple's Regent Street store in London on 3 May.

One interesting thing about the Python Bytes app is the way it randomises the order in which sketches are played: users shake their iPhones to skip to a new clip.

"When we made the shows, we spent so much time making sure they went out in the order we planned them, untouched," says Gilliam, referring to the infamous re-editing of the series for transmission in the US.

"Now we're letting them be used any way. It doesn't bother me any more, although at the time it might have. Certain sketches work better than others, so let's edit out the weak stuff. And I do like the randomness: the serendipity of it." 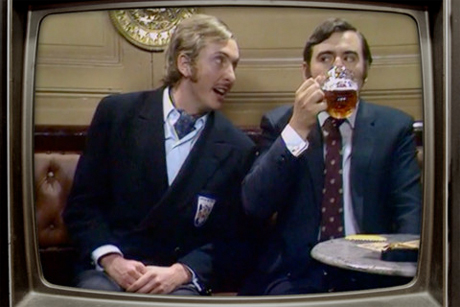 Gilliam gracefully bats back a suggestion that his use of animation in the original shows was as technologically advanced for its time as a slick app is in 2012 – "It was very crude animation!" – but he has interesting views on interactive media.

He actually worked on a CD-ROM game in the mid 1990s, which Gilliam says he really enjoyed, even though the project ultimately fell apart before it could be released. More recently, he was involved in the promotional campaign for console game Heavy Rain.

"I don't like interactivity when it comes to doing films. That's being a storyteller," he says.

"A movie to me is something I make, and you can watch it. Hopefully I engage you, and you like it and are stimulated by it. But you don't get to share in it. But in video games, you can, and that's interesting. The two worlds should both exist."

Gilliam notes that games are having an impact on some filmmaking aesthetics now though – he cites Inception as a prominent example – and talks approvingly of the fact that filmmakers like Heuristic's Loncraine are bringing their storytelling skills to apps.

"Richard's running with this thing, and we're delighted with his enthusiasm and inventiveness," he says.

"The problem with Python now is that we're not together enough to make the decisions we used to when we were working together every day. But with Richard, I trust him, and know he's going to do a good job and make interesting choices."

In the meantime, Gilliam remains a critical yet engaged observer of the world of apps and tablets, including from the standpoint of his day-to-day work on a computer with Wacom tablet, and on pen and paper.

"I've got an iPad, but it frustrates me, because it's not really a computer," he says. "Some of the things I want to do, I can't do well on it. I have this Bamboo Stylus now to do drawings on the iPad, but the nib is too big: I find it very cumbersome still."

interesting
now tell us about uruguay

1 am capitán poo and sail the titicaca