When two African penguins showed no interest in mating with females at Toronto zoo, and only with each other, they were separated. Was that right? 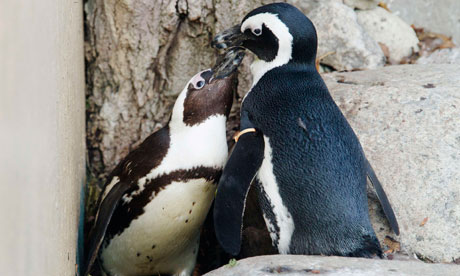 African penguins Pedro (right) and Buddy only have eyes for each other at Toronto zoo. Photograph: Mark Blinch

When Toronto zoo bought African penguins Pedro and Buddy from Pittsburgh's National Aviary, they expected them to mate with two females. Instead, despite being trailed by lovelorn lady penguins, they only had eyes for each other, engaging in what naturalists call "courtship behaviour". So Tom Mason, the zoo's curator of birds and invertebrates, ended the relationship on the grounds that it was jeopardising the future of the species. Despite the impression given by programmes such as Frozen Planet, which show carpets of penguins as far as the eye can see, the African penguin is on the verge of extinction. Only 60,000 are left in the wild (down from 225,000 two decades ago), and the zoo doesn't feel it can allow a season to go by without Pedro and Buddy's genes being passed on.

Some were outraged at the zoo's decision to separate the pair, with Gawker caustically commenting: "They probably wouldn't have sex with a woman if they were the last penguins on earth anyway." In fact, the sexuality of penguins is rather more fluid than those anthropomorphising them might wish.

Even the previous, much cooed-over pairs of gay penguins to hit the headlines turned out to be more Bloomsbury group than Elton and David. Roy and Silo, the penguins at New York zoo who inspired their own children's book, split up after Silo took up with a female; the same happened to Harry and Popper at San Francisco zoo.

Perhaps Mason was merely preventing heartbreak down the line. Or rather, they're just, you know, penguins.

I basically agree with those who feel using the term 'gay' in relation to a relation between 2 animals is somewhat problematic.
In the gay media one will occassionaly read some enthusiastic anouncement of a pair of animals of the same sex forming a couple in this or that zoo.
The reason why these media have any care at all for such a subject is - in my personal opinion - that they consider such events to be powerfull arguments against those who oppose to an openly homosexual lifestyle because they see it as something unnatural.
It is not having sex with this or that other person that's unnatural, it's creating labels for a multitude of sexual subcultures that is unnatural - i.e. a type of action to be found exclusively within homo sapiens.

The problem non-heterosexual people face in society is that for them to be able to construct a true own identity they have no choice but to make use of categories. For the abscence of these categories does not lead to a situation in which every individual is relatively free to openly live the sort of relations he or she fancies but it leads to a heterosexual-by-default situation: the norm to which everybody has to conform will inevitably be a form of heterosexualism. Those who choose for a different lifestyle must either do so secretively - which is very common in many cultures to this very day - or they seriously risk to take on disadvantageous positions in society - e.g. male prostitution in ancient Rome. It should be noted that I don't mean to say that an openly "abnormal" sexual orientation necessarily leads to such a disadvantageous positions - though there are undoubtely numerous examples of this -, but that there is a strong prevalence of making a direct, though possibly implicit, link between an orientation that is perceived as undesirable and social positions that are equally viewed as such.

The creation of a categorie - a noun - allows for the space to create a positive identity rather than a negative one.
Instead of being a pervert - a term that covers all sorts of sexual variations - one can be, for instance, homosexual.
Inevitably every new category will inherit to some extend the negative social connotation of more general terms that were used to designate sexual deviations. To some part of society, homosexuality will be nothing more or less than a sub-category of perverts. And as a consequence, whatever goes for perverts goes for homosexuals.
It is in reaction to such opinions that members of this sub-categories will sometimes be tempted to search for a more neutral foundation for ther orientation - nature. But when doing so they make abstraction of the specifc cultural context in which these categories were first conceived and thus extend the meaning of the noun beyond its boundaries.

It wouldn't be the first time I hear someone trying to "justify" or "normalize" humans behaviour by comparing it to non-human animals behaviour. They try to strenghten their position with this as if there wasn't almost any differency. For some matters it just sounds wrong and I dislike it. So I wonder: to which extent can one compare humans behaviour to animals behaviour?

As for comparing human norms with animal behaviour: this tendency is obviously caused by the fact that, if you think about it, our norms and customs aren't really based on anything at all. It's basically just what a certain percentage of us do or think should be done.
Now if you want to maintain a certain respect in society for these norms - and in the much smaller and vulnerable "societies" that predate our modern culture there was every reason to do so -, it's best to present them as a bit more solid than that.
And so they either come from god or stem from nature - which often comes down to the very same thing as nature is supposed to have beenn created by god.

I'm very surprised that Africa has a species of penguin at all. Where do they live? Environs of Cape Town, presumably.